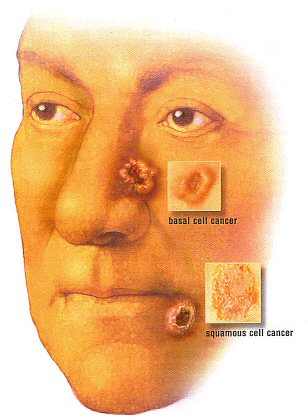 They Are Curable When Diagnosed Early

Basal and squamous cell skin cancers are the most common cancers in the United States. Virtually all cases are curable if found and treated early. Each year, approximately one million people in this country will be diagnosed with either basal cell or squamous cell cancers, and it is projected that close to half of all Americans 65 and older will develop these skin cancers sometime during their lives. These cancers are also known as nonmelanoma skin cancers, to distinguish them from melanoma, a deadly skin cancer that develops in melanin-containing cells in the skin and spreads throughout the body. Nonmelanoma skin cancers often do not spread throughout the body but are contained in a small area and can be easily removed and cured. The most common cause of nonmelanoma skin cancer is ultraviolet (UV) radiation from the sun, although artificial UV radiation from tanning booths and sunlamps can also lead to these cancers. The greater the amount of exposure over a person’s lifetime, the greater the risk of nonmelanoma skin cancer.

Basal cell and squamous cell cancers are the most common forms of cancer, and both are triggered by exposure to ultraviolet radiation. They do not spread readily and can be cured.

The flat cells in the epidermis, the outer layer of the skin, are known as squamous cells. Underneath this layer is a layer of round cells known as basal cells. These are the two types of skin cells most likely to become cancerous. Basal cell carcinoma is found in approximately 90% of all cases of nonmelanoma skin cancer.

Primary Cause: The primary cause of skin cancer is exposure to UV radiation from the sun. Most cases of skin cancer appear in people over age 50, but the risk of skin cancer is related to the amount of UV radiation exposure a person has had over a lifetime. It is important to protect the skin during the early years of childhood, since most sun exposure occurs during these years. Limiting your amount of exposure during the strongest sun of the day (in most areas, from 10 AM to 2 PM standard time or 11 AM to 3 PM daylight saving time) and avoiding artificial tanning beds or sunlamps is the best protection against skin cancer. Because vitamin D is important to health, limiting daily sun exposure to 15 to 20 minutes is a natural way of increasing vitamin D levels safely. When exposed to the sun longer than this time, the skin should be protected with clothing and sunscreens. Sunscreens are rated using a sun protection factor (SPF) scale. The higher the SPF number, the better the product blocks UV rays from reaching the skin. Sunscreens with ratings of SPF 15 to 45 block much of the harmful UV light. Any sunscreen product should be applied liberally to all skin exposed to the sun and reapplied every two hours. Sunscreen should also be used on hazy days, since UV light can penetrate through broken cloud cover.

Warning Signs: Warning signs of skin cancer include the appearance of a new growth or a sore that does not heal in two weeks. The areas most commonly affected by nonmelanoma skin cancer are those exposed to the sun, including the skin on the face, neck and head, and hands and arms. Basal cell cancer may appear in a variety of forms, ranging from a small, shiny, pale or reddish lump to a flat, red area that is rough and scaly. The lump or flat area may bleed or crust over. Squamous cell cancers vary in appearance and many appear as pale or red raised areas that can bleed and crust over, resembling a scab. These changes are usually painless. Any change in ihe skin similar to those described that do not heal or disappear in two weeks should be examimed by a doctor, just to be safe. If the doctor determines that the skin changes are not a normal condition, a biopsy may be ordered, ro rule out cancer. Some or all of the growth is removed and examined under a microscope, to look for cancer cells. If cancer is diagnosed and there is a chance that it has spread, the lymph nodes in areas near the cancer may be biopsied to check for presence of cancer cells. The doctor may also order other imaging tests.

Treatment Procedures: If the cancer has been found early and is unlikely to have spread, the treatment may simply be a complete removal of the cancerous growth. This is often true in nonmelanoma skin cancers, which are not likely to spread. This surgery involves the use of a local anesthetic to numb the area, then the cancerous growth is removed with a sharp instrument, and the surrounding area is treated with an electric current to stop the bleeding and kill any remaining cancer cells. A flat, light-colored scar usually forms where the cancer has been removed. Topical chemotherapy (applied to the top of the skin) in the form of creams or lotions may also be appropriate to treat some forms of skin cancer.

If you have questions about skin protectants and how to use them, be sure to ask your pharmacist.