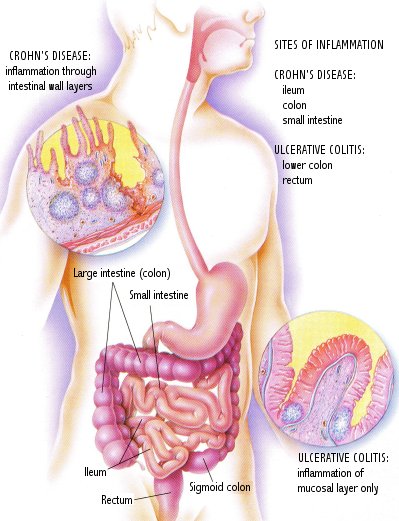 Ulcerative colitis and Crohn ‘s disease are classified as inflammatory bowel disease (IBD). They have common symptoms of abdominal pain, diarrhea with or without blood, weight loss, fever and fatigue. In more severe cases, dehydration can result and hospitalization may be necessary. The goal of treatment is to reduce the chronic inflammation of the gastrointestinal tract that causes these often disabling symptoms. The cause of IBD is not clearly understood, but it is believed that infection, the environment, family history of disease and an altered immune system all play a role. New drugs to relieve symptoms and that produce fewer side effects are available, but if they do not work, surgery may be needed.

Inflammatory bowel disease may lead to damaged tissue in the gastrointestinal tract.

Chronic inflammation of the gastrointestinal tract is common in Crohn’s disease and ulcerative colitis. Both diseases share common symptoms, and their severity, especially abdominal pain and diarrhea, are often disabling.

Crohn’s Disease: In Crohn’s disease, inflammation affects all the layers of the intestinal wall, leading to ulceration. Inflammation may occur in patches of the intestine, with normal areas in between. The colon and terminal ileum are most often affected. Patients usually have loose stools or diarrhea, pain in the lower right side of the abdomen and weight loss. Blood may appear in the stools, although it may not be easily seen. Other symptoms are nausea, vomiting, fever and fatigue. To confirm the diagnosis, physicians use a device to inspect the intestine (sigmoidoscope) and take a rectal biopsy. The extent of disease is determined by barium enema. Once drugs control the symptoms, they are slowly tapered off. This is important because the drugs used (see below) have undesirable side effects.

Ulcerative Colitis: Inflammation in ulcerative colitis occurs on the surface of the intestinal wall (colon and rectum), affecting only the top layer or mucosa. Ulcerative colitis is classified as mild, moderate or severe. The damaged mucosa extends throughout the colon, without areas of normal bowel in between. Severity of diarrhea is a good clue to the seriousness of colitis. The inflammation of the intestinal walls stops water and electrolytes from being absorbed. The contents move faster through the intestine because it does not contract to slow down movement, allowing stools to form. In mild cases, the diarrhea may occur only three or four times daily. In severe cases, there may be leakage of the bowel, and constant diarrhea, even throughout the night. Often, there is blood and mucus in the stool. The irritated colon spasms, causing abdominal cramping. Other complications include weight loss, dehydration, low potassium and sodium levels, fatigue, anxiety and rapid heart beat.

Drug Therapy: Treatment for ulcerative colitis is generally the same as that for Crohn’s disease. The goal of therapy is to reduce the often severe disabling symptoms. Drugs reduce the diarrhea and must be taken exactly as instructed. They should never be used in severe cases of colitis to avoid a condition known as toxic megacolon. Toxic megacolon is a serious complication, arising when the colon begins to swell and stops propelling stool toward the rectum. Symptoms include fever, fast heartbeat, abdominal pain and distension, weakness and sudden stopping of diarrhea. Toxic megacolon is a medical emergency. The colon could perforate and internal bleeding could result. Newer drugs are used at lower doses and thus have fewer side effects. Medications used to treat IBD include oral aminosalicylates (including sulfasalazine, mesalamine and olsalazine), corticosteroids, and immunosuppressants such as azathioprine and cyclosporine; antibiotics may be used in Crohn’s disease. The corticosteroids and mesalamine are also used in an enema formulation if the inflamed area is located in the distal colon and rectum. In both conditions, surgery is a last step if other treatments fail. In Crohn’s disease, the affected areas of the intestine are removed; in ulcerative colitis, the colon itself may be removed, but this is not desirable because an ileostomy (passageway from the ileum to the outside) often must be constructed.