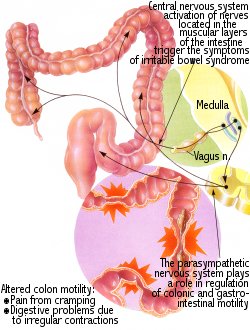 Symptoms Include Pain and Cramps

Irritable bowel syndrome (IBS), sometimes called “spastic colon,” is a condition in which a patient suffers lower gastrointestinal symptoms such as diarrhea, diarrhea alternating with constipation, abdominal cramping and pain, gas and bloating, and mucus in the stool. No cause for these symptoms can be found, so it is known as a “functional” bowel disease. This means the lower gastrointestinal tract doesn ‘t function normally, but there is no apparent physical reason for these symptoms. There is no specific test for IBS; it is diagnosed by ruling out other diseases with similar symptoms. The symptoms of IBS often begin or are made worse by stressful events, such as the death of a loved one, divorce, or school exams. Treatment includes dietary changes and drugs such as antispasmodics, antidiarrheals, antacids, anti-gas medications, or antidepressants. For some patients, psychotherapy is useful to help deal with stress. For most patients, the symptoms of IBS improve with therapy or when a patient’s stress is relieved, and in some patients, IBS may suddenly disappear and never return.

For patients whose symptoms of IBS do not improve with dietary changes or stress reduction techniques, medications may be used to obtain relief.

Stress May Be an IBS Trigger

Irritable bowel syndrome (IBS) occurs in 1 out of 5 Americans and has no known cause. It is most often seen initially in the late teens or early 20s, and typically starts during a stressful event, such as school exams or from a loved one’s death. It may improve after time, or simply disappear. For some people, it is so disabling that one is unable to work, socialize, or travel even a short distance. The symptoms of IBS include diarrhea (sometimes alternating with constipation), abdominal cramping and pain relieved by a bowel movement, bloating, mucus in the stool, and a feeling of incomplete evacuation after a bowel movement.

Diagnosis: IBS is also known as spastic colon, because the patient appears to have a sensitive colon that reacts more intensely to normal stimuli such as eating a meal or the normal gas that results from eating foods like beans or broccoli. It is often referred to as a functional gastrointestinal disease because there is no sign of disease when the intestines are examined. It is not related to the more serious inflammatory bowel diseases such as Crohn’s disease or ulcerative colitis. Although it can result in much distress, IBS does not cause harm to the intestinal tissue, or lead to bleeding, inflammation, or colon cancer. A diagnosis of IBS is made after a complete history of the patient’s symptoms is taken. Often a sigmoidoscope (a flexible tube) is utilized to allow the physician to view the colon, looking for inflammation or other diseases that might also cause symptoms of IBS. A barium enema x-ray or abdominal sonogram may also be used.

Foods and IBS: Some IBS patients’ symptoms become worse after eating certain foods, such as daily products, or gas-producing foods like onions, beans, or broccoli. Keeping a diary of symptoms and determining which foods cause symptoms to become worse is the best way to identify problem foods. Avoiding carbonated beverages and gum can help cut down on bloating and abdominal pain. For patients who have diarrhea shortly after eating, it is often helpful to eat several smaller meals throughout the day, and limit the amount of fat in these meals.

Treatment: There is no specific treatment for IBS, but there are several ways to manage the symptoms. These include changes in diet, trying stress reduction techniques, and treating specific symptoms, such as abdominal pain, diarrhea, or constipation, with medications. Diarrhea may be controlled with antidiarrheal medication taken before meals. A new drug has recently been introduced for women whose primary IBS symptom is diarrhea. In patients suffering from depression or anxiety along with IBS, antidepressant or antianxiety medications have been used successfully. For many, a regular exercise program can relieve stress; exercise is especially helpful in patients suffering from constipation. Constipation may be helped by the occasional use of laxatives. Constipation is also treated by increasing the intake of fiber and water in the diet; a moderate amount of fiber helps both constipation and prevents abdominal spasms since it keeps the colon slightly distended all the time. Taking an antispasmodic drug before meals may help relieve abdominal pain and spasms related to eating. If you suffer from the symptoms of irritable bowel syndrome, see your doctor to rule out other diseases. Your pharmacist can answer your questions about the drugs that are used to treat the symptoms.