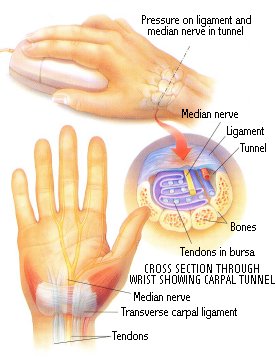 The carpal tunnel is a passageway that permits entry of the median nerve from the wrist into the hand. Carpal tunnel syndrome is a painful ailment that occurs when tendons in the tunnel swell and compress the median nerve, thus causing loss of nerve function in the fingers and hand. The pinching, or compression, of the nerve is due to swelling that occurs from repeated wrist movements when an object is gripped. A shooting pain from the wrist up into the arm, or down into the palm of the hand or fingers, may be felt. The pain may be worse at night. Mild cases can be treated with nonsteroidal anti-inflammatory drugs or a wrist splint, but more serious cases may require surgery.Numbness, tingling, pain and muscle weakness in the first four fingers are signs of carpal tunnel syndrome.

Definition: Carpal tunnel syndrome is a nerve ailment caused by compression, or pinching, of the median nerve, which supplies feeling to the hand and fingers. The condition is also known as repetitive stress disorder. The tendons in the carpal tunnel, which control finger movement, become swollen or inflamed as a result of repeated stressful movements while the wrist is flexed. Swelling leads to compression of the median nerve, which uses the carpal tunnel as a passageway from forearm to the hand. When the median nerve is compressed, pain, tingling and numbness occur and are felt in the first four fingers of the hand, while the little finger is not affected. The wrist and hands can be affected at the same time.

Cause and Appearance: Carpal tunnel syndrome often affects people in occupations that require repeated wrist action. The most stressful movements to the wrist are those that require pinching or gripping while the wrist is bent. Most patients are middle-aged women, and the condition is usually related to a person’s occupation. Computer operators, typists, meat cutters, dental hygienists, factory workers, mechanics, musicians and others engaged in occupations that require a small number of repetitive muscular motions are commonly afflicted. (In the last century, blacksmiths were often affected.) Pregnant women who retain water may complain of carpal tunnel syndrome but the symptoms will eventually disappear after the child is born.

Symptoms: A tingling or numbness in the first four fingers and hand is often the first sign of inflammation. A shooting pain up the arm or into the palm is another sign. For many, the pain is worse at night and can awaken the patient. For most patients, the symptoms are mild, and with proper treatment, the pain and numbness can be relieved without permanent damage to the nerves involved.

Diagnosis: A nerve conduction velocity study is done to diagnose the condition. It measures the speed at which the median nerve carries an electrical signal. If the median nerve is compressed in the carpal tunnel, this test will show a slowing of the electrical signal. Another test will elicit a shooting pain in the hand or arm when the carpal tunnel is tapped gently. One sign is that the patient feels no pain in the little finger.

Treatment: With early treatment, the symptoms can be relieved and permanent nerve damage avoided. Sometimes the sensation of pain and numbness can be relieved by shaking the hand and wrist gently. Immobilizing the wrist with a splint relieves pain and numbness, especially at night. If possible, activities that caused the inflammations would be avoided. Nonsteroidal drugs, such as acetaminophcn or aspirin, can benefit some patients. Diuretics have been used in patients with worsening symptoms such as before menstrual periods, when fluid retention is high. In more severe cases, steroid injections in the area may be prescribed to relieve pain, but these are not used if there is numbness or muscle weakness. When drugs and other treatments fail, surgery to release the band of fibrous tissue responsible for constricting the median nerve is an option. If you have any questions about treatment and side effects, be sure to ask your physician or pharmacist.