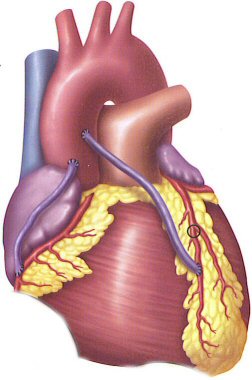 One of the most common major operations performed each year in the United States is coronary artery bypass graft (CABG) surgery. This surgery is indicated for patients with serious coronary artery disease that has caused the arteries that supply blood to the heart muscle (coronary arteries) to become narrowed or completely blocked with plaque. Using arteries or veins (grafts) from other parts of the body, the cardiac surgeon redirects the blood flow around the blocked arteries to “bypass” the blockage and restore enough blood flow for the heart muscle to work properly. Since CABG surgery is major surgery, there is a great deal of preparation necessary before the procedure. In addition to the typical presurgery laboratory tests, the patient may be required to have an echocardiogram and/or a coronary angiogram. Conventional CABG surgery involves a long incision down the center of the chest, and the surgeon opens the chest cavity by cutting through the breastbone to reach the heart. The heart is stopped from beating while the patient is placed on a heart-lung machine. A newer method of CABG surgery known as “off-pump” CABG has been used to eliminate the heart-lung machine, allowing the surgeon to operate on the heart while it continues to beat.

Fatty substances that build up on the walls of the arteries, reducing blood flow to the heart, can lead to chest pain and eventual heart attack.

Coronary artery disease is the result of plaque that builds up on ihe walls of the arteries that supply the heart with blood. Plaque, mostly the result of high cholesterol in rhe blood, causes the arteries to become narrow and blocked, making blood flow difficult. Narrowing of rhe arteries means less oxygen reaches the heart muscle, leading to chest pain, or angina. Many patients can control their anginal chest pain using medications such as nitrates, beta-blockers, or calcium channel blockers. When these treatments fail, certain patients can be helped by a procedure called angioplasty. Angioplasty opens small areas of blockage by threading a small catheter with a balloon at the end into the artery, then inflating the balloon to open the artery. Stent (a tiny steel mesh holds the artery open) placement and rotational atherectomy (a tiny high-speed drill grinds plaque inio small pieces) are other options to open blocked coronary arteries. However, these procedures are not always successful and are not the best treatment for persons with extensive coronary artery disease. CABG surgery is the best choice for many patients to avoid a heart attack.

Detour Around Blockages: CABG surgery is a procedure in which the cardiac surgeon creates a detour for the blood to flow around blocked areas of the coronary arteries. Often, four, five, or more arteries are bypassed during the surgery. The surgery itself lasts from three to six hours, and during this time the patient is anesthetized and connected to a ventilator, which breathes for him or her during, and for a short time after, the surgery. In conventional CABG surgery, the heart is stopped for approximately one hour while the surgeon grafts sections of veins (taken from the leg) or arteries (taken from the chest wall or forearm) around the blocked coronary arteries to restore a path for blood to flow.

Postsurgical Care: After surgery, patients are transferred to a cardiac intensive care unit for 24 hours or more, depending on their condition. The ventilator is removed as soon as the patients can breathe comfortably on their own. Most patients remain in the hospital for several days after their surgery to allow for testing. Once home, patients are given an exercise stress test to determine the success of the surgery. A cardiac rehabilitation program is begun to allow them to increase their strength and return to a normal lifestyle.

Recurrence: The likelihood of recurrence of coronary artery disease after CABG surgery depends on several factors. There is some risk that the veins or arteries used in the grafts will become blocked over a period of time. The sections of leg veins are more likely to become blocked than the chest wall arteries, but the arteries are shorter segments and cannot always be used as bypass grafts. Up to 20% of leg vein grafts are blocked one year after surgery, and at 10 years, one third of all leg vein grafts are blocked. At the end of rhe same 10-year period, 90% of all chest wall artery grafts are still open. As a result, surgeons are using these arteries for grafts more often.

Not a Cure: CABG surgery is not a cure for coronary artery disease. Although it will restore adequate blood flow to the heart muscle, it does not reverse plaque formation in other vessels or stop future formation of plaque. This is why it is so important that patients with coronary artery disease follow their doctors’ orders to reduce their cholesterol, maintain fitness by exercise and weight control, stop smoking, lower high blood pressure, and tightly control blood sugar if diabetic. Most CABG patients are treated with cholesterol-lowering drugs, blood pressure medications, and other drugs as necessary to avoid future artery disease.