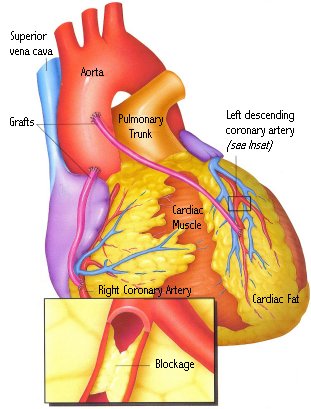 The coronary arteries supply the tissues of the heart with oxygen. A buildup of fatty deposits (plaque) in the arteries will cause a blockage and stop the flow of blood. The result is often chest pain, a heart attack or sudden death. A coronary artery bypass operation can replace the clogged artery with an artery or vein taken from a different part of the body. In many patients, relief is almost immediate, with diminished chest pain and an improved ability to perform normal functions.

A coronary artery bypass can replace a clogged artery with a clear artery or vein taken from the patient.

Bypass of a Clogged Vein

When the large coronary arteries carrying blood to the heart become narrowed or clogged, and the heart needs more oxygen than these arteries can supply, a condition known as cardiac ischemia results. This narrowing of the coronary arteries often begins early in life, although many people do not experience symptoms until the disease has progressed over many years. The symptoms most often seen with a coronary artery blockage are chest pain (angina), heart attack (rnyocardial infarction) or sudden death from an abnormal heart rhythm. If a patient with chest pain cannot be treated successfully with medication, or if the pain worsens (even with treatment), coronary arteriography may be performed to determine the amount of artery blockage present. With severe blockage, an operation known as a coronary artery bypass may be necessary. In such an operation, a section of an artery or vein in the patient will be removed and used to replace the diseased artery. The first coronary artery bypass operation was performed more than 30 years ago and since then more than one million people have undergone the procedure.

Origin of Blocked Arteries: A blocked artery usually is a result of buildup of cholesterol. Increased levels of blood cholesterol can lead to a waxy deposit (known as plaque) inside the artery walls. If there is too much of this material in the blood over a long period of time, the deposits will become bigger and cause blood to move more slowly through the blood vessels. Eventually, a clot can develop at the site of the plaque. The artery may become so blocked that most of the blood flow through it is stopped.

Relatively Safe Procedure: Coronary artery bypass is a relatively safe procedure that allows the blocked section of one or more coronary arteries to be “bypassed” and replaced by a graft of the patient’s own vein. This operation is usually indicated when all of the major coronary arteries are severely blocked. There are other considerations taken into account when a coronary bypass operation is considered, such as the patient’s age, physical condition, degree of symptoms and which arteries are blocked. Often a bypass operation is recommended for a younger person, while an older patient may be treated with medication unless the angina pain is very severe, even with normal activity. The goals of a coronary artery bypass operation include: relief of chest pain; increase in exercise ability; improvement in the heart’s function; prevention of a heart attack; and a longer life expectancy.

Relief of Pain: Relief of pain is seen in almost all patients who have surgery, although some patients continue to require some medication to control chest pain. It is difficult to prove that the other goals of bypass surgery are met because most patients who undergo surgery have a wide variety of medical problems. And in some cases, the arteries may become clogged again after a few years. After surgery, patients may be placed on medications to help prevent any future blood clots or fatty deposits from reforming in their arteries. Bypass patients are often placed on special low-fat diets and exercise regimens and are required to have their physicians constantly monitor their progress.