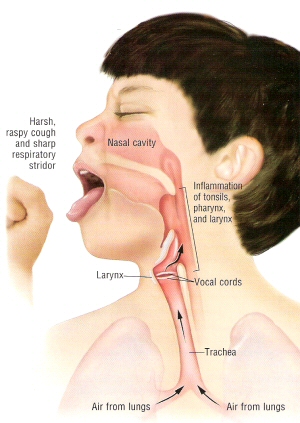 Croup is a swelling of the tissue around the larynx (voice box) and trachea (windpipe) that results in a tight, barking cough. Croup usually occurs in infants or children under the age of five, although older children and teens may suffer from it. Since most cases of croup are caused by the same viruses that cause colds or flu, the condition is more common during the winter, when these viral infections are prevalent.

Croup usually begins a few days after the symptoms of a mild cold and usually is worse during the nighttime hours. The typical cough of croup lasts for three to five nights, with improvement each night until the cough is gone. Often the tight, barking cough and difficulty breathing will awaken a child, and the symptoms of croup can be frightening for both child and parent.

Mild cases can be treated at home by using cold, moist air (e.g., a cool-mist humidifier) or moving the child into a steamy bathroom or into the cold outside air for a short time. The treatment of a more severe case of croup, especially if the child is having difficulty moving air, requires a physician’s care. In many cases, a short course of oral corticosteroids will relieve the swelling that causes the symptoms of croup, helping lessen the cough and making it easier for the child to sleep. During the day, the child should rest, drink plenty of fluids, and avoid cough medicines unless directed by the doctor. Although most cases of croup are not dangerous, it is important to contact the doctor if more serious symptoms, such as difficulty breathing, bluish skin around the mouth or nose, problems swallowing, or loud noises when inhaling, are present. These symptoms could indicate a more dangerous, bacterial cause of croup that needs aggressive treatment to prevent complications. 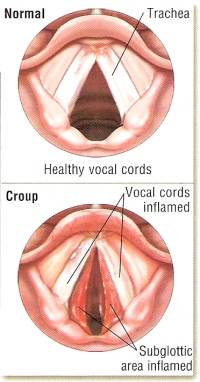 The cough of croup is caused by swelling of the tissue around the voice box and windpipe (airway). Since a child’s windpipe is narrow, this swelling can seriously affect breathing. Because of its symptoms, croup can be a frightening experience for the parent as well as for the child, although it usually is not a serious condition.

The symptoms of croup, which usually appear several days after development of mild cold-like symptoms, are its trademark seal-like barking cough, hoarseness, and sometimes fever. The cough is generally worse at night and can awaken the child from sleep. If the child’s airway is narrowed sufficiently, a harsh, rasping noise occurs when the child breathes in. This symptom is called stridor.

Since croup can be an alarming condition when it is first encountered, parents often call their child’s doctor for treatment guidance. Croup is diagnosed by performing a physical examination that includes listening to the child’s breathing and cough.

At-home treatment of croup includes increased intake of fluids and plenty of rest during the day, with acetaminophen to treat fever, if present. Cough medicine should not be used unless directed by a physician. At bedtime, the use of a cold, moist air vaporizer in the child’s room is often recommended. If the cough becomes severe during the night, many doctors recommend moving the child into a steamy bathroom after running a hot shower or taking the child into the cold outside air for a shorr time. If these measures do not ease the symptoms or if the child is exttemely agitated, shows bluish skin around the lips, or has difficulty swallowing or moving air, medical treatment should be sought immediately�-don’t wait until morning.

In serious cases of croup, drugs such as corticosteroids or epinephrine can be used along with humidified air to ease the cough and breathing difficulties associated with severe airway swelling. In some children, a few days of oral corticosteroids will help shrink the swelling and clear symptoms more quickly. Serious bacterial causes of croup include epiglottitis and bacterial tracheitis. Epiglottitis is a life-threatening inflammation of the epiglottis (a flap of cartilage that covers the airway during swallowing) in which the resulting swelling can block the airway. Bacterial tracheitis is a bacterial infection of the upper airway. Both of these conditions require diagnosis by a doctor and antibiotic therapy.