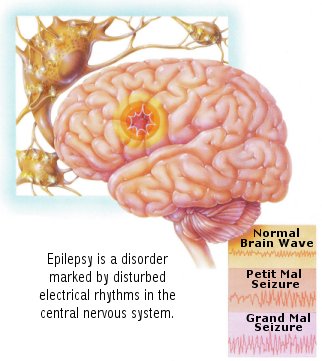 Epilepsy is described as any disorder marked by excessive discharge of neurons in the brain, which can lead to a seizure. A seizure may result in disturbances in motor activity, such as jerking movements, behaviorial changes, and loss of consciousness, awareness, or sensation. Not all seizures are diagnosed as epilepsy. An isolated seizure may be caused by a high fever or trauma to the head. The seizures seen in epilepsy are rarely associated with an outside stimulus. When a person experiences a seizure more than once, a thorough workup, including a brain scan and EEG, is done to determine the cause and to confirm a diagnosis of epilepsy. Correcting the cause of the seizure is often an effective treatment. For example, if a brain tumor is causing seizures, the tumor can be removed by surgery. Although there is no cure for epilepsy, drugs can keep seizures under control. There are more than 20 antiepileptic drugs (also known as anticonvulsants) on the market today. Each drug has a specific use and its own set of side effects. The challenge is to find the right drug or combination of drugs and the right dose that can control the seizures without producing side effects. With effective treatment, epileptic patients can lead normal, seizure-free lives.

Symptoms of epilepsy vary widely, depending on the type of seizure that occurs. Before some seizures, a patient may experience an aura, a feeling or sense that a seizure is about to occur. After a seizure, the patient may be in a deep sleep, have a headache, feel confused, or have muscle soreness.

Epilepsy affects about 2.5 million people in the United States. Each year, 125,000 new cases are diagnosed. About one-third of these cases develop in children under age 18. A single seizure is not considered to be epilepsy; there are many reasons a seizure can occur in a normal brain. A seizure may be triggered by lack of oxygen, very low blood sugar, drugs, infection, very high fever, or trauma to the head. If a seizure recurs, a diagnosis of epilepsy is made and testing will be done to find a cause for the abnormal brain activity.

Testing: Tests for a cause of seizures include a magnetic resonance imaging (MRI) scan or a computed tomography (CT) scan of the brain, an electroencephalograph (EEG), and blood tests. A complete patient history is taken to document the symptoms before, during and after the seizure, and to help determine a possible cause. When a cause for the seizures (such as a tumor) is found and there is a way to treat this condition, the epilepsy is termed symptomatic. If there is no known cause for the seizures, it is called idiopathic epilepsy.

Seizure Types: Symptoms of epilepsy vary widely, depending on the type of seizure that occurs. Before some seizures, a patient may experience an aura (a feeling or sensation) that a seizure is about to occur. Most patients have one type of seizure, but about one-third of patients with epilepsy have two or more types. After experiencing a seizure, the patient may go into a deep sleep, have a headache, feel confused, or have muscle soreness. Partial seizures occur in one part of the brain, and may result in a change in consciousness. Generalized seizures occur in many parts of the brain, often resulting in a loss of consciousness.

Types of Seizures: Generalized Tonic Clonic (Grand Mal)seizure is characterized by a sudden cry and stiffening of the body, muscle jerks, and irregular breathing that lasts a few minutes. A patient having an Absence (Petit Mal)seizure may have a blank stare, with eye blinking and mouth chewing movements; it lasts a few seconds. Simple Partial or Partial Sensory (Jacksonian) seizure begins with jerking in fingers and toes and may spread to the arms and entire body. There is no complete loss of consciousness. Complex Partial or Psychomotor (Temporal Lobe) seizure patients have a blank stare, begin chewing, and seem dazed or confused; this state lasts a few minutes. In Atonic seizures a patient drops to the ground and loses consciousness for about a minute. Myoclonicseizure patients have muscle jerks in all or part of the body. Infantile spasms are quick, sudden movements in a child under 3 years; arms and head lean forward. The spasms last a few seconds but are repeated many times a day.

Treatment: Hundreds of different epilepsy syndromes are often described by the part of the brain where they start (for example, frontal lobe epilepsy) and their symptoms (absence epilepsy, psychomotor epilepsy). Once the specific diagnosis is made, a treatment plan can help control future seizures. Medication controls seizures in about 80% of patients. It is important to begin treatment as soon as the diagnosis is made, since epilepsy is more difficult to treat once seizures have become established. In two-thirds of patients whose seizures are well controlled, epilepsy medications can be discontinued after 2 to 5 years. Seizure medication should never be stopped without a doctor’s permission, since sudden withdrawal can result in life-threatening seizures.