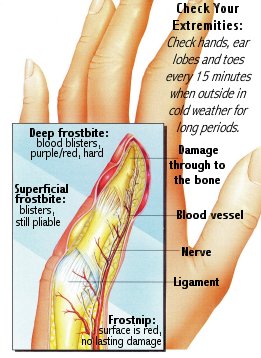 When a person is exposed to low temperatures for a period of time, the body reduces blood flow to skin surfaces. The result is that tissues can actually freeze, resulting in the condition known as frostbite. Areas most likely to be affected by frostbite are the hands, feet, ear lobes, nose and cheeks. The skin looks white and waxy and the affected area can sting and then become numb. Rapid rewarming in a water bath can minimize tissue damage.

The term “frostbite” covers three stages: frostnip, superficial frostbite and deep or severe frostbite. In frostnip, the mildest form, the skin begins to freeze. Damage can be prevented by drying and gently rewarming the skin against another area of warm skin. Most people recognize frostnip when the skin turns white and sensation in the area begins to fade. Continued cold will cause the tissue to freeze and frostbite to develop. True frostbite causes permanent damage to the frozen tissue. Blisters usually form, along with a thick black scar. Gangrene can occur, with loss of a toe or finger in severe cases. Rewarming in a water bath can minimize tissue damage. Some reasons for frostbite to occur are inadequate protective clothing; long periods of exposure to cold; illness, exhaustion; high winds; circulatory disease; and inadequate food or water intake.

Superficial Frostbite: If the area of the skin is not rewarmed after frostnip occurs, superficial frostbite can develop quickly. The skin becomes white and cold, but the tissue beneath is still soft. Treatment involves rapidly rewarming the area if there is no danger of refreezing. The affected area should be submerged in a warm water bath (105°-108°F) for 20-30 minutes, or until color returns. A bath that is too hot or rubbing the area with ice or snow can cause permanent damage. A heating pad or other heating apparatus should not be used because the temperature cannot be controlled and rewarming of the part must be done evenly. When rewarmed, the frozen area becomes red and swollen and a burning sensation is felt. Blisters appear within hours or days and the fluid in the blisters is absorbed during the following weeks. Blisters must not be broken so that infection and scarring do not occur.

Deep Frostbite: When the frozen parts include the nerves, muscles, tendons or bones, deep frostbite has occurred. The area is blue or grey, mottled, very swollen and the tissue underneath is hard and has no feeling. When rewarmed in a water bath, the color does not return to the area. A thick black scar forms and comes off in 4-8 weeks, with very tender skin underneath. A whirlpool bath may be recommended for the injured area once or twice a day until the healing is complete. In severe cases, gangrene develops under the scar and can require surgical amputation of the affected fingers or toes.

Prevention: The best treatment of frostbite is prevention. Simple rules to follow include proper dress with several layers of loose clothing and protection of the face, neck or extremities. In severe cold, mittens instead of gloves should be used because they permit the thumb to be placed alongside the rest of the fingers. Boots should be insulated and fit snugly, never tightly so as to block circulation, over heavy wool or other warm socks. Alcohol might give the sensation of warmth, but it actually causes loss of body heat. Smoking should also be avoided because nicotine constricts blood vessels in the fingers and toes, causing an even greater chance for frostbite to occur. To avoid frostbite, never go beyond the exposure to cold that can be tolerated. Be sure to check sensation in the nose, cheeks, ear lobes, hands and toes every 15 minutes when outside in cold weather for long periods.