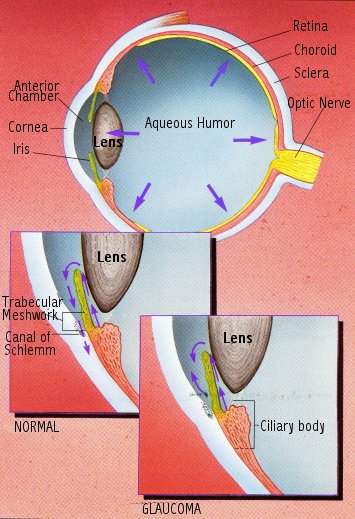 Glaucoma occurs when aqueous humor formed by the ciliary body is unable to leave the eye through the trabecular meshwork and Canal of Schlemm. The build-up of pressure causes damage to the optic nerve and, eventually, loss of vision. In most patients, there is no pain and it is hard to recognize the slow loss of vision. Glaucoma is often undetected unless regular eye checkups are performed. Once the loss of vision occurs, it is permanent and cannot be corrected.

With glaucoma, loss of vision happens slowly. The only way to detect the condition is for a doctor to measure intraocular pressure.

Glaucoma: Blindness is a Danger

Several risk factors for developing primary glaucoma include a family history of glaucoma, increasing age, race (blacks have a higher risk), nearsightedness and diabetes. Secondary glaucoma is a result of an outside condition, such as injury to the eye, tumors, inflammation, cataracts and certain medications.

The two main types of glaucoma are open angle glaucoma and angle-closure glaucoma. The common type is open angle, where the increase in intraocular pressure is slow and the loss of vision happens so slowly that it is not noticeable. It usually begins in people over 40 years of age and can result in blindness by age 60 or 65 if left untreated. The only way to detect and diagnose open angle glaucoma is for a doctor to measure the intraocular pressure and examine the optic nerve and the changes in the patient’s vision.

Angle-closure glaucoma is a rare form of glaucoma in which there is a sudden increase in intraocular pressure. It can be a medical emergency if not treated rapidly. Patients with angle-closure glaucoma often have severe pain around the eye, with headache, blurred or loss of vision and even nausea and vomiting. The affected eye is red and hazy. The intraocular pressure must be lowered rapidly to prevent permanent vision loss.

Treatment: There are several eye drops for treating glaucoma by lowering intraocular pressure.

Beta-blockers, the most common eye drops used in glaucoma, are effective and can be used once or twice a day. They work by decreasing the amount of aqueous humor. Examples of these medications include betaxolol, carteolol, levobunolol, metipranolol and timolol. They do cause some stinging when they are first placed in the eye. In some patients, the medication in the eye drops can be absorbed into the body and cause side effects in patients who are sensitive to them. These side effects include bronchospasm, slowed heart rate, depression, restlessness or confusion. A special method of instilling the eye drops can help avoid some of this absorption.

Miotic drugs cause the pupil to constrict (“miosis”) and allow the aqueous humor to flow more freely, which decreases the intraocular pressure. The miotic drugs used today include carbachol and pilocarpine. They are shorter acting than the beta-blocking drugs and must be used three to four times a day, which may be a problem for some patients. They are often used in patients who do not respond to the beta-blocking drugs.

Epinephrine, and its relative dipivefrin, are used in glaucoma because they decrease the production of aqueous humor and at the same time increase its outflow to lower intraocular pressure. They are used once or twice a day. The side effects include headache and red, itchy, watery eyes.

It is very important for the proper technique to be used to instill the drops in the eye. Your pharmacist can show you this technique and some tips for the correct use of eye drops.