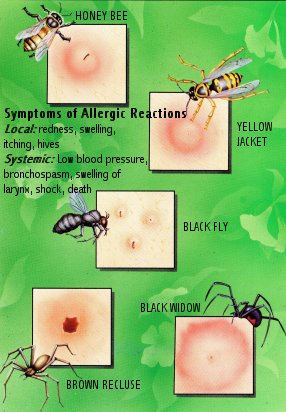 Allergic reactions to insect stings and bites are common. Reactions to stings include redness, pain and swelling in the area of the sting. Severe allergic reactions occur quickly, usually within minutes; they are less common but can be dangerous. They may cause a sharp drop in blood pressure, a shock-like state, bronchospasm and even death. They must be treated immediately and may require a trip to the emergency room.

Allergic reactions to insect stings and bites are common and can be severe.

When an insect stings, the skin is penetrated by the piercing organ of the insect and venom is released into the area. This venom is potent and the effect after the initial pain ranges from a mild local reaction to a serious systemic effect. After a honeybee sting, the stinger, which is barbed, breaks off and remains embedded in the skin. The smooth muscle wall of the venom sac continues to inject venom even after the bee has flown away. The honeybee dies after it stings, but this is not the case with the wasp, yellow jacket, hornet and bumblebee. Their stingers are smooth and can be withdrawn, allowing them to sting again and again. Fire ants and harvester ants use their jaws to attach themselves before biting and, as a result, many people believe their bite causes the reaction that follows. However, it is the venom that causes the reaction.

Allergic Reactions: Allergic reactions can be local, systemic or a mixture. A local reaction is confined to the area of the sting. These reactions can be quite painful, with significant redness and a large area of swelling lasting from a few hours to several days. Systemic hypersensitivity reactions usually cause symptoms within 15 minutes of the sting or bite. Systemic reactions can be dangerous. Initial symptoms include local swelling of the sting site, with redness, intense itching, hives, followed by a drop in blood pressure, swelling of the larynx, difficulty breathing, shock and death. Less common reactions can cause nausea, vomiting and diarrhea. Treatment must be started quickly before the reaction becomes life-threatening. Reactions may be local or systemic depending on several factors: the amount of venom injected, the area of the body stung and the site where the venom enters (skin layer or small blood vessel). It is important for people who are hypersensitive to venom to avoid situations where bites/stings usually occur.

First Aid: Whenever a person is stung by an insect, basic first aid should be begun. This includes removing the stinger and applying ice packs to the area. Ice will slow the absorption of the venom and relieve the itching, swelling and pain. If a honeybee stinger is carefully removed within the first few minutes after the sting, less venom will be injected into the site. If systemic symptoms develop, immediate medical attention is necessary. If hypersensitivity to insect venom is known, an emergency kit can be prescribed to reverse a serious systemic reaction. This kit will contain a self-injecting syringe containing epinephrine. Epinephrine helps expand the airways, regulate heart beat and raise blood pressure. It is also wise to take an oral antihistamine at the same time. Desensitization injections of small amounts of insect venom may also be used to protect against allergic reactions. If your doctor has prescribed an emergency insect sting kit, you must understand the directions for use. Your pharmacist will be able to answer any questions you may have about the treatment of insect stings.