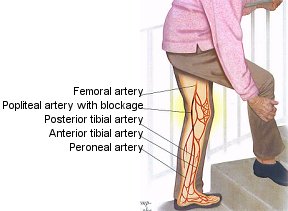 Intermittent claudication is a painful, cramp-like condition usually experienced in the calves that begins during exercise and disappears at rest. Intermittent claudication is often a symptom of peripheral artery disease, a disease in which the arteries in the arms and legs become hardened in a manner similar to atherosclerotic heart disease. When arteries become clogged by the accumulation of fats and other materials along the walls of these blood vessels, it is difficult to maintain enough blood flow to supply the tissues with oxygen. In the peripheral arteries of the legs and arms, this results in pain during exercise, a time at which oxygen demands are increased.

Intermittent claudication is a temporary condition that causes pain and cramping, usually in the calves, during walking or running. When the exercise is stopped, the pain is usually relieved. This is because the arteries in the legs are unable to supply enough oxygen-rich blood to the muscles when their oxygen demands are increased during exercise. This intermittent pain can also occur in the arms during strenuous exercise if the local arteries are narrowed. Symptoms of intermittent claudication are often made worse by conditions that cause the arteries to constrict, including certain medications or cold temperatures. As the condition worsens, the pain can continue even when the muscles are at rest. Without treatment, more serious symptoms can develop, such as poor circulation in the feet and toes, ulcers of the lower legs, ankles, or feet, or even gangrene.

Diagnosing the Condition: The diagnosis of intermittent claudication is usually made by taking a careful history of the pain, since it occurs in such a classic pattern. Several tests can help determine if the blood flow in the peripheral arteries is abnormal. Calculating the difference in blood pressures measured in the arm and the ankle, called theankle-brachial index, can determine if blood flow is abnormal and the severity of the condition. Other tests that can be used to examine the peripheral circulation include Doppler ultrasound, MRI, and angiographic imaging using an injectable dye.

Treatment Based on Severity: Changes in lifestyle that can positively affect symptoms of intermittent claudication include smoking cessation, cholesterol reduction through diet, exercise, and medications (if needed), and an exercise program to slowly condition the leg muscles and increase the amount of exercise that can be tolerated without pain. If these measures are not effective, there are drugs approved for the treatment of intermittent claudication. If a patient has peripheral artery disease as well as intermittent claudication, antiplatelet drugs such as aspirin or clopidogrel can increase blood flow and prevent blood clots from forming in the narrowed arteries.

Cilostazol is an antiplatelet medication that helps patients with intermittent claudication walk further without pain while controlling cholesterol. Pentoxifylline keeps the blood flowing more smoothly by preventing blood from sticking to the sides of atherosclerotic vessels. Currently, scientists are studying the efficacy of other drugs in improving blood flow and relieving symptoms.

In patients wirh severe symptoms, vascular surgery or angioplasty may be required when medications are not effective. Vascular surgery allows the blood to flow through a grafted blood vessel from another part of the body around the blocked artery, in a manner similar to a cardiac bypass graft. Angioplasty uses a balloon catheter to open a narrowed artery. A wire mesh stent may be inserted to hold the artery open and maintain blood flow, in a similar way as coronary angiopiasty of the arteries that supply blood to the heart. If a blood clot is blocking an artery, a “clot-buster” drug mav be used ro dissolve the clot and restore blood flow to the area.