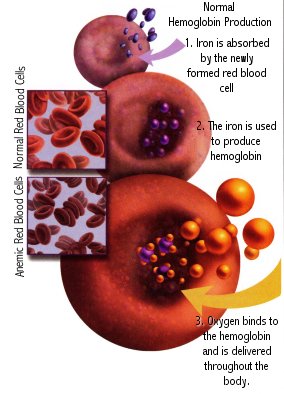 Anemia is a condition that results from decreased hemoglobin, a molecule in red blood cells that carries oxygen to all the cells in the body. There are many varieties of anemias, but the most common is iron deficiency anemia. This type of anemia develops from a lack of iron in the body, which is needed to make hemoglobin. Our normal source of iron is obtained through our diet, and it is absorbed and stored for future use. If there is a lack of iron in the body due to poor diet, poor absorption of iron, or the loss of iron through bleeding, iron stores in the body can become dangerously low. Iron deficiency anemia is hard to recognize in its early stages. Eventually, symptoms, such as fatigue, pale skin, irritability, and perhaps fast heart rate or shortness of’breath, become apparent. Laboratory tests are needed to confirm the diagnosis of iron deficiency anemia. Since iron deficiency anemia could be a sign of a serious condition, such as bleeding polyps, an ulcer, an inflammation of the stomach lining, or cancer, the cause must be determined. The treatment is to take iron supplementation to restore the iron levels in the body.

Iron deficiency may lead to poor functioning of the central nervous system. Fatigue, irritability and dizziness are symptoms. With sufficient iron supplementation, the hematocrit should return to normal after approximately two months of daily treatment.

Iron deficiency anemia is the most common form of anemia in the world. Women are at higher risk than men because they have smaller iron stores due to their smaller body size. Pregnant women are at even greater risk because increased iron stores are needed to support the growth of their baby. Menstruating women are also at greater risk because of increased loss of iron through bleeding. Children and teenagers are likely to be affected due to an increased need for iron during periods of rapid growth. Iron deficiency anemia in children can also be caused by lead poisoning. In men or postmenopausal women, iron deficiency anemia is more likely caused by blood loss through the gastrointestinal tract due to bleeding ulcers, polyps, or gastritis (inflammation of the stomach lining).

Symptoms: The first symptoms of iron deficiency anemia are mild, since this is a condition that develops slowly. Many patients are not even aware they have anemia, especially in the early stages. Symptoms first appear when iron stores become very low. They include pale skin color, fatigue or weakness, irritability, shortness of breath (especially when exercising), dizziness on standing, fast heart rate, headache, brittle nails, and sore tongue. The diagnosis of iron deficiency anemia is made by measuring the hematocrit and hemoglobin in the blood. In some cases, an iron level and TIBC (total iron binding capacity) will be measured. A test for blood in feces or urine (guaiac test) may be ordered to look for gastrointestinal bleeding. Since anemia, even mild anemia, could be a sign of a serious condition, such as cancer, bleeding polyps, an ulcer, or gastritis, it is important to identify the cause.

Oral Iron Supplementation: Most patients with iron deficiency anemia can be treated with oral iron supplements, usually in the form of an iron salt such as ferrous sulfate, ferrous fumarate or ferrous gluconate. (Iron supplements should never be prescribed without first confirming the patient is iron deficient and anemic. Unnecessary iron supplementation can cause gastrointestinal problems.) The standard adult dose of ferrous sulfate is one 300-mg tablet three times daily. These tablets should be kept out of the reach of children, who can be fatally poisoned from swallowing only a few tablets. Children require a far lower dose of iron, which is available for them in an oral liquid form. Other oral forms of iron supplements for adults include a slow release ferrous sulfate and an iron complex, which have fewer side effects than regular iron salts. If iron is not tolerated orally, an injectable form is available, but it is not used often due to sometimes severe side effects. Ask your pharmacist about side effects of iron supplementation, such as nausea, stomach complaints, or dark stools.

Taking Iron Properly: Iron is absorbed best on an empty stomach, but many people take it with food to avoid stomach upset. Iron is not well absorbed when taken with milk or antacids. Therefore, the latter should not be taken until two hours have passed after iron supplements have been taken. With sufficient supplementation, the hematocrit should return to normal after approximately two months of daily treatment. Iron supplements should be continued for 6 to 12 months to slowly replenish the depleted body stores of iron. Iron-rich foods include meats, fish, and poultry; egg yolks; beans; whole grain breads and cereals; and green leafy vegetables.