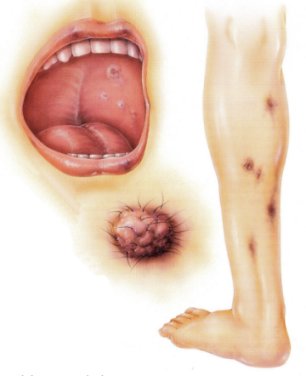 Small Tumors Appear Under the Skin

Kaposi’s sarcoma is a cancer of the connective tissues, first described in 1872. It was a relatively rare form of cancer until about 20 years ago, when the number of cases exploded in patients with HIV or AIDS. In HIV-positive patients, the signs of Kaposi’s sarcoma may be the first clue of the development of full-blown AIDS. This cancer causes the growth of small tumors under the skin’s surface or in the mucous membranes of the mouth, nose or anus. It can cause painful swelling in the legs, groin, genitals, soles of the feet, around the eyes on the face, or in the mouth. The most common sign of Kaposi’s sarcoma in HIV/AIDS patients are raised brown or reddish-purple blotches, usually seen on the upper body or face/mouth. Some of the treatments for Kaposi’s sarcoma include injecting the tumors with cancer-killing drugs, radiation, surgery, or freezing the tumors with cryotherapy. Chemotherapy can also be used in certain patients. There are many experimental drugs being tested to find more effective and safer ways to treat this often disabling cancer. The best way to prevent Kaposi’s sarcoma is to prevent HIV infection. This means avoiding unprotected sex and the use of contaminated needles.

Once Kaposi’s sarcoma is diagnosed, the disease is staged to determine how far it has developed in the body. The staging of the cancer helps doctors decide the best treatment for the patient.

Kaposi’s sarcoma (KS) was once a rare cancer found only in white men of Mediterranean or Jewish descent, adult African men, or organ transplant patients with suppressed immune systems. Forms of this cancer are more common since the AIDS epidemic. In the U.S., about 95% of all cases of KS are found in homosexual and bisexual men with AIDS. One in four of these men will have this disease sometime during their illness. Scientists believe that this cancer is linked in some way with a specific herpes virus that is transmitted through sexual contact. Kaposi’s sarcoma can also develop in homosexual men who are not HIV-positive.

Classic Kaposi’s Sarcoma: There are several types of KS. The classic KS that afflicts Jewish or Mediterranean men after age 50 remains rare. It is a slow, mild form of the cancer, with a few tumors developing on the legs, ankles, or feet over many years. Although the tumors can develop throughout the body, they rarely cause symptoms. Kaposi’s sarcoma that afflicts African men is more common, and may begin at a much younger age. It is similar to the classic form of KS, and often the tumors do not cause symptoms or spread to other parts of the body. KS can also be seen in organ-transplant patients who must take drugs that suppress, or weaken, the immune system so they will not reject their transplanted organ. KS is also typically milder in these patients, sometimes only affecting the skin, although it can spread to other parts of the body. It may disappear after the patient stops taking the immune-suppressing drugs.

AIDS-related Kaposi’s Sarcoma: A much more serious form of this cancer is AIDS-related KS. In HIV-infected patients, the human immunodeficiency virus weakens the immune system. This allows the cancer to develop, usually when an HIV-positive patient develops AIDS. AIDS-related KS causes many tumors to develop at the same time, often under the skin, in the mouth and other mucous membranes, in the lymph nodes, and in some internal organs such as the gastrointestinal tract, lung, liver, and spleen. The first signs in AIDS patients are usually swollen and painful lymph nodes, fever, and weight loss. Slightly raised blotches on the skin that usually appear on the legs, face, feet, ears, mouth, or genitals can look like other skin disorders. There is no test to detect this cancer before the tumors appear, so it is important for people who are HIV-positive to be regularly examined for signs of KS. Typically, AIDS patients with KS do not die from the cancer, but if tumors appear in the lungs, they can prove fatal.

Treatments Available: In general, all forms of this cancer occur more often in men than in women. Researchers are trying to discover if certain hormones might protect women. Homosexual and bisexual men have the highest risk of developing KS; the risk is also higher in people with sexually transmitted disease or those with many sexual partners. Treatment depends on the type of Kaposi’s sarcoma, the number and location of the tumors or swelling, and the condition of the patient. In mild cases, such as in classic Kaposi’s, radiation to the area or surgery to remove small tumors may be the best treatment. Chemotherapy with anticancer drugs can be injected directly into the tumor. Systemic anticancer drugs can be used by mouth or by injection into the bloodstream. At this time, treatment for AIDS-related Kaposi’s sarcoma is aimed at relieving pain and swelling caused by the tumors.