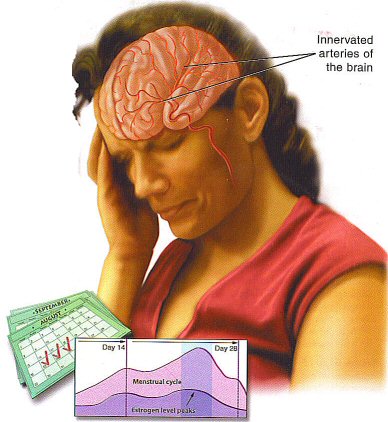 Migraine is a specific type of headache often described as a throbbing pain, usually on one side of the head, that worsens with bright light or loud noise. 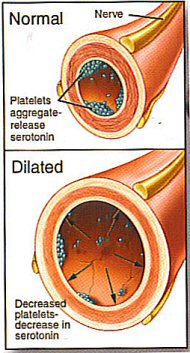 Some patients can predict a migraine before it begins because they recognize certain symptoms (known as “auras”) prior to an attack. Auras are typically visual, such as flashing lights, zigzag lines, or blind spots. Specific conditions, or triggers, such as anxiety, exhaustion, bright lights, or hormonal changes in women, can bring on a migraine. The migraine sufferer often can identify these triggers by keeping a headache diary. In many cases, migraines are disabling, and scientists are still unsure of their exact cause. Researchers are working to understand the basic cause of the pain, its relationship to the nervous system in the brain, the levels of certain chemicals in the brain, and the genetic link that can determine who will suffer from migraines.

Migraines Can Be Mild or Severely Painful

Preventing attacks and treating pain quickly are the cornerstones of migraine therapy.

Approximately 28 to 30 million Americans, three quarters of whom are women, suffer from migraines. Most people have their first migraine during their teenage years or as young adults. Migraines and tension headaches are usually easy to distinguish from each other. Typically, tension headaches are described as a steady, aching pain on both sides of the head, and they are mild or moderately painful. They rarely have other accompanying symptoms.

Debilitating Headaches: Migraines can be mild, moderate, or severely painful and are often debilitating. Migraine pain occurs on one side of the head in ahout 60% of the cases, and on both sides of the head in the remaining 40%. Migraines are sometimes accompanied by visual changes (aura) just before the pain begins, plus nausea or vomiting, and sensitivity to bright lights or sounds. Sensations of numbness or tingling may be felt in an arm or leg. Migraine pain often worsens with activity. As a result, many patients find some relief resting in a quiet, dark room. Untreated migraines can last from a few hours to several days.

Triggers: The cause of migraines is unknown. Researchers are focusing on the trigeminal nerve system in the brain and changes, which may be genetic, that take place in the levels of brain chemicals during a migraine. Scientists are also looking into magnesium levels in the blood, which are known to be lower before and after an attack. Certain events or environmental factors have been identified as triggers and include certain foods {red wine, beer, pickled foods, caffeine, and monosodium glutamate found in many Asian foods), stress, intense exercise, too much or too little sleep, changes in hormone levels in women, and environmental changes such as glaring light, strong scents, or changes in the weather. It is helpful to keep a headache diary, recording when, where, and how the migraine began; how long it lasted; whar circumstances surrounded the headache; and what medication relieved the pain.

Diagnosis and Prevention: Diagnosis can be made with a thorough physical examination. If rhe headaches do not have the typical symptoms of a migraine, are not relieved by medication, or are severe or come on suddenly without warning, imaging tests may be required to determine whether the pain is due to a more serious condition. Preventing migraine attacks before they happen and treating headache pain quickly are the cornerstones of treatment. Avoiding triggers is a simple preventive technique that can be used once the triggers are identified in a headache diary. Regular routines of sleep, meals, relaxation techniques, and exercise also help avoid migraines. If migraines occur several times a month, preventive medication can be used to lessen the severity and duration of pain and cut down on the number of attacks. Ibuprofen and naproxen can be taken regularly to prevent attacks. Several antihypertensive medications, such as beta-blockers and calcium-channel blockers, have reduced the number of attacks and their severity. Antidepressants, antihistamines, and drugs that treat seizures have also helped. Hormone therapy is often beneficial for women who suffer migraines related to hormone levels, such as those occurring before or during their menstrual cycle, during pregnancy, or during menopause.

Treatment: Medications that relieve migraine pain work best when taken at the first sign of headache. Drugs specifically developed to treat migraine pain, known as triptans, work quickly and very effectively in most patients and have replaced an older class of drugs that has bothersome side effects. Prescription nonsteroidal anti-inflammatory medicines are also effective, including newer ones that are less likely to cause stomach upset. Ask your pharmacist if you have any questions about the medications used to treat migraine headaches.