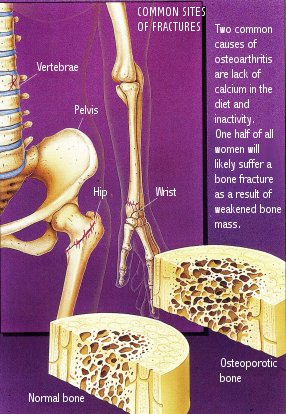 Weak, Brittle Bones Osteoporosis results in weak and brittle bones. Although it affects more than 25 million Americans, most patients do not know they have the condition. The first sign of weakened bones is a fracture after a fall, bump or even a strain. The break most often occurs in the hips, spine or wrist. Osteoporosis is commonly thought to occur in old age, but it can develop anytime during life. It is most often seen in women, especially after menopause.

Women have less bone mass than men and lose even more after menopause due to a decrease in estrogen levels.

The bones of the skeleton seem to be solid, but throughout one’s life they are constantly changing, breaking down and rebuilding. This process, known as remodeling, rebuilds bone tissue and releases minerals that are important to the body. Until age 35, the bones continue to become stronger. During the next 15 or 20 years, bone mass stays about the same. In women, however, estrogen levels fall after menopause and the bones begin to lose their density. The situation is especially worsened in women who experience menopause before the age of 45.

Loss of bone mass raises risk: Osteoporosis affects over 25 million Americans, 80% of whom are women. Women have less bone mass than men during adulthood and they lose bone mass after menopause because estrogen levels decrease. As a result, one of every two women will have a bone fracture that is due to osteoporosis. Other factors that increase the risk of developing osteoporosis include eating disorders, low calcium in diet, physical inactivity, smoking, excessive use of alcohol or caffeine and, in men, low testosterone levels. Certain drugs, such as corticosteroids or anticonvulsants, may also increase the risk. A family history of osteoporosis is another risk factor. Changing the risk factors, by increasing calcium in the diet or stopping smoking and reducing alcohol intake, can lower the risks.

Bone density test: Osteoporosis usually is not diagnosed until a fracture occurs, or the disease has become so severe that back pain or a loss in height has occurred. There is a painless test to see if bone mass has decreased. The test, known as a bone density test, will show if osteoporosis has already developed and can spell out the risk of having a fracture in the future. The test is similar to an x-ray but uses a much smaller amount of radiation. The bone density test compares the patient’s bone density reading to a normal reading in someone who is the same age, sex and size of the patient. The test may be repeated each year to see how fast bone mass is lost. In a patient who is taking a drug for osteoporosis, the test will also show how well the drug is working.

Early diagnosis: If diagnosed early, osteoporosis can be stopped from progressing. The treatment is usually estrogen therapy, to replace the estrogen that is lost after menopause, and calcitonin, a hormone that stops the breakdown of bone. A recent study has shown that a combination treatment of slow-release sodium fluoride and calcium citrate can strengthen bones and prevent vertebral fractures in women with osteoporosis. Patients with osteoporosis are also asked to eat a diet high in calcium (a building block for strong bone), prescribed a vitamin D supplement to help the calcium become absorbed, told to engage in an exercise program and given other counseling to ensure a healthy lifestyle to prevent further bone weakening. Teenage girls are advised to increase their consumption of calcium. It is important to note that simply taking calcium supplements or eating a high-calcium diet is not enough to prevent osteoporosis. Calcium slows but does not stop bone loss. Patients with osteoporosis should follow a complete treatment plan recommended by their doctor. 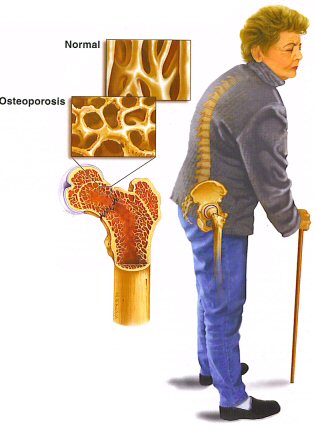 A Serious Health Condition in an Aging PopulationLow bone density affects 44 million Americans, including 10 million people whose bone density is so low that they have been diagnosed with osteoporosis. Osteoporosis occurs most often in people older than 50, and as the population in the United States ages, it is rapidly becoming a serious health problem. Its costs are estimated at $17 billion per year and growing. Osteoporosis is a condition in which bone tissue weakens, and is thus more likely to fracture. One of every two women and one of every four men will have a fracture as a result of bone weakening. Osteoporosis can be prevented or delayed by taking preventative measures. Prevention begins with changes in lifestyle that can help reverse bone loss and put a stop to continued bone weakening. One of the most important ways to keep bones strong is to have a high intake of calcium and vitamin D, which prevents calcium from leaving the bone tissue. This can be done through diet or by taking supplements containing calcium and vitamin D. Other preventative measures include regular but limited exposure to the sun, daily weight-bearing exercise, and avoidance of smoking and excess alcohol. Bone density testing tests are readily available and they can assess the risk of osteoporosis.

There Are Ways to Prevent Bone Loss

Bone is a living tissue made up of collagen (the flexible protein framework) and calcium (the mineral strength). Throughout our lives, old bone tissue is resorbed (broken down and removed) and new bone is added. In order for new bone to be laid down, adequate calcium is needed, as is vitamin D to help absorb the calcium in the diet. During the childhood and teen years, old bone is resorbed more slowly and new bone is added faster. As a result, bones become larger and heavier during these years of rapid growth. But after peak bone density is reached around age 30, bone tissue is removed faster than it is added. This begins a period of gradual bone weakening. For women, more rapid bone loss takes place at the beginning of menopause due to low estrogen levels. Men can develop bone loss due to low testosterone levels.

Preventative Measures: Women who are older, have small bone structure, are white or Asian, or have a family history of osteoporosis are at greater risk for bone loss than the general population. Poor diet, especially inadequate calcium and vitamin D, can result in bone weakening. Smoking, excess alcohol, and a sedentary lifestyle can also lead to a loss in bone mass. In addition, gastrointestinal or kidney disease, alcoholism, thyroid disease, or the chronic use of certain drugs such as corticosteroids or anti convulsants can cause osteoporosis, regardless of a person’s age, lifestyle, or risk from family history. Calcium is an important mineral needed for many body functions, such as heartbeat, blood clotting, hormone release, and nerve conduction. Almost all calcium is stored in bone and teeth; only a small amount is found in the bloodstream. Because the body does not produce calcium, the only way it can satisfy the demand is through diet or vitamin supplementation. If the amount of calcium in the body is low, it is pulled from the bones into the bloodstream, thus leading to the weakening of bone tissue.

Taking a Bone Density Test: In many women osteoporosis is often diagnosed after a fracture. People can take a simple test to determine their bone density. It is recommended that bone density can be done on all women older than 65, women age 60 who have an increased risk of osteoporosis, or postmenopausal women who have either had a fracture or have an increased risk for osteoporosis. The test for bone density is easy, painless, and requires no preparation. There are essentially two versions of the test: The simple test found at the pharmacy or doctor’s office examines the density of bone at the heel or finger, and the more complex test measures bone density at the hip and spine (considered more accurate). The results of the tests are reported as a T-score and a Z-score. A T-score is the patient’s bone density compared to the bone density of a normal young adult of the same sex, reported as the number of units above or below this standard bone density. If the T-score is between zero and negative 1, it is normal. If the T-score is between negative 1 and negative 2.5, there is bone weakening present, and a score below negative 2.5 is considered osteoporosis. A Z-score compares bone density to that normally expected of someone of the same age, sex, weight, and ethnic background. If a Z-score is quite different from the comparison bone density, there may be other reasons for the bone loss besides aging.

If a person is shown to have low bone density, there are steps that can be taken to improve bone strength, including drug therapy. If you have questions about medications used to treat or prevent osteoporosis or questions concerning supplements, be sure to ask your pharmacist.