Coronary artery disease is caused by a buildup of plaque on the walls of the coronary arteries. Plaque narrows the vessels and blocks blood flow to the heart. Eventually, it can trigger a heart attack. One of the symptoms of coronary artery disease is chest pain (angina). If changes in lifestyle such as diet, exercise, and smoking cessation, along with medications, do not improve symptoms, angioplasty or cardiac bypass surgery may be needed. Angioplasty is a procedure in which a tiny balloon is inserted into a blocked coronary artery through a small catheter until it reaches the blocked area. Then the balloon is inflated, enlarging the narrowed artery and allowing blood to flow through the artery again. To prevent the artery from collapsing later, a stent may be used to keep the artery open. A stent is a support that permanently holds open the walls of a blocked artery so that blood can flow through. Stents are now used in up to 75% of all angioplasty procedures, with good success and few complications.
Stents are used in a procedure known as angioplasty to keep open arteries blocked by buildup of plaque. A balloon and the accompanying stent are threaded into the blocked artery, first to open it and then to prevent it from collapsing.

Coronary artery disease is caused by a buildup of plaque (hardened fat deposits) on the walls of the coronary arteries, leading to a narrowing of the vessels and poor blood flow to the heart. The primary symptom of coronary artery disease is chest pain (angina). A blocked coronary artery can trigger a heart attack. Coronary artery disease is treated first with diet, exercise, and smoking cessation (if applicable). If these do not improve blood flow, medications can be used. In some patients, however, cardiac bypass surgery or angioplasty may be needed.
Cardiac Bypass Surgery vs. Angioplasty: Cardiac bypass surgery reroutes the blood around the blocked artery. It is effective, but it is major surgery, requires extensive recovery, and is expensive. Angioplasty is a procedure that avoids surgery, requires a brief hospital stay, and is much less costly than bypass surgery. Angioplasty was first developed over 20 years ago. It is very common today, and can now be performed in patients who have a blockage covering large areas, severe blockage, blockage of more than one artery, or who have an artery blocked in more than one place. Even patients whose chest pain is controlled by medication may have better results with angioplasty.
What Are Coronary Stents? Coronary artery stents were first used in 1986, and are now used in almost 75% of all angioplasty procedures. Before undergoing angioplasty, a patient will have a coronary arteriogram, a procedure in which a physician inserts a large needle into an artery in the leg or arm. A guide wire is threaded through the needle and follows the arterial system through the aorta into the blocked coronary artery. Then a catheter, or narrow tube, is inserted over the guide wire. A dye is injected into the catheter and a moving x-ray shows exactly where a blockage or plaque is located. In performing angioplasty to open up the blocked artery, the physician uses a special catheter with a tiny balloon at its tip. The balloon is placed exactly where the plaque is located, and is inflated several times, each time further widening the narrowed artery. The balloon actually compresses or crushes the hardened plaque, but it may weaken the artery wall. In about three-quarters of the patients, a stent is used with the balloon. The stent is opened as the balloon is inflated; then the balloon is deflated and removed. The stent remains as a permanent support to keep the artery from collapsing. After a few weeks, the artery lining grows over the surface of the stent. Arterial stents are usually made of metal and come in a variety of styles, including a coiled spring and an expanding mesh. Newer polymer stents are being introduced, and some are even made with drugs or chemicals embedded in them that help prevent the artery from becoming blocked again. Stents that expand slowly by themselves after they are placed in the blocked artery have also been developed. After a stent has been implanted, a patient is placed on one or more drugs (for example, aspirin, Coumadin, or ticlopidine) for the first 4 to 6 weeks to help prevent blood clots from forming. Typically, a patient will be instructed to take aspirin for an indefinite period of time. Angioplasty and stent implantation only correct the existing blockage of blood flow through narrowed coronary arteries. To slow the further buildup of plaque, follow your doctor’s advice about diet, exercise and medications. Your pharmacist can answer questions you may have about medications. 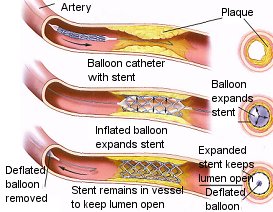 A stent is a tiny metal mesh tube that is inserted into a narrowed or blocked artery to open it and restore blood flow. The most common use of a stent is to open an artery that is partially blocked by plaque, which builds up on the inner artery walls and slows blood flow to the heart. The stent holds the blood vessel open until the body can coat it with its own blood vessel cells, which stops the risk of blood clot formation. This healing process normally takes about six months to complete, although the stent remains in place permanently.

There are several types of stents available, including those that are coated with a medication that is slowly released into the artery to keep scar tissue from forming and to prevent the artery from closing again during the healing process. Unfortunately, these special stents, known asdrug-eluting stents, have recently been blamed for blood clot formation in rare cases that resulted in heart attacks or even death, months or years after they were inserted. This may be a result of the drug slowing the healing of the clogged artery. Recently, a new drug-eluting stent, similar to dissolvable stitches, has been developed. It is designed to dissolve about two years after it is inserted. A magnetized stent is also being tested that would allow blood vessel cells incorporated with iron to grow over the stent more quickly. Clinical testing is ongoing to determine the safety and efficacy of this new stent, which could reduce the risk of blood clot formation while avoiding restenosis.

Since the introduction of cardiac stents, millions of patients have been treated with this new technology and, in many cases, have avoided open heart surgery to correct blockage of blood vessels leading to the heart. The insertion of a stent during or following a cardiac angioplasty procedure helps relieve chest pain and related symptoms by increasing blood flow to the heart muscle. However, not all patients with atherosclerosis and narrowed or blocked arteries will benefit from stent placement. Some patients cannot undergo the procedure to insert the stent, and others cannot tolerate the antiplatelet medications that must be taken for a year or more after the stent is inserted.

About six million patients worldwide have been implanted with drug-eluting stents, which became available in 2003. Each year, two million additional people will receive a drug-eluting stent, with one million of these in the United States. During the procedure, a stent is inserted through a large artery in the arm or groin and is threaded up into the narrowed artery over a balloon catheter. In some cases, the balloon is inflated and the stent opens, propping open the artery and restoring blood flow. In other cases, the balloon opens rhe artery and the stent is inserted immediately afterward.

Complications, including bleeding, blood clots, or infection, can occur as a result of stent placement. Rarely, a blood vessel can tear during the procedure. Some patients are allergic to the stent material or the drug coating on the stent. After the stent has been placed, it can move out of place. The artery can become blocked again after the stent has been in place for a period of time – a condition known as restenosis. To prevent restenosis and to help healing, patients who have received a stent take anticlotting medications for specific periods of time, as prescribed by their doctors. Most patients take aspirin for the rest of their lives and likely will take an additional antiplatelet drug, such as clopidogrel, to prevent blood clots for a year or even longer. Doctors are now trying to determine the proper length of time that patients with bare metal and drug-eluting stents should take clopidogrel to avoid the risk of blood clot formation.

Your pharmacist can answer any questions you may have about medications your doctor has prescribed, including antiplatelet medications used after stent implantation.