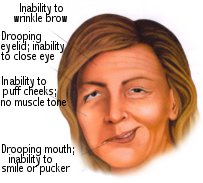 Paralysis May Occur on One Side of Face

Bell’s palsy is a condition that afflicts 40,000 Americans each year and results in facial paralysis. The most recent research has linked the facial paralysis seen in Bell’s palsy with a viral infection due to herpes simplex-1 virus. The paralysis in Bell’s palsy occurs often from a single attack and it typically affects only one side of the face. After an attack, patients often have trouble blinking properly, producing tears, and closing their eye, so eye protection is very important in order to avoid damage to the cornea. The most severe symptoms of Bell’s palsy appear immediately after an attack, but in most people they disappear spontaneously within one month with no treatment. About 20% of patients suffer from the residual effects of facial paralysis about six months after the attack; these patients will require some type of treatment or rehabilitative muscle therapy. When an attack of Bell’s palsy occurs, it is often misdiagnosed as a stroke, another type of bacterial or viral infection, tumor, or neurologic syridrome. If Bell’s palsy is correctly diagnosed early, antiviral medications can be somewhat effective if they are given within the first six or seven days. A therapist can provide an exercise program to help patients retrain facial muscles to control the unwanted movements. Botox injections have also been used to control spasmodic muscles and improve the appearance of the face while muscles are being trained. These injections must be repeated every 3 to 6 months.

Some patients with long-term paralysis experience uncontrolled facial movement, which probably develops as nerves begin to heal. A physical therapist can often help the patient learn to control these unwanted movements with exercises to retrain the muscles.

Herpes Virus May Be a Cause

Bell’s palsy was first described in the 1800s by a Scottish physician, Charles Bell. Bell’s palsy occurs equally in males and females, and in all racial groups. It is more likely to occur in older people, although children are also affected. Persons who are pregnant, diabetic, or whose immune system is compromised are more likely to be stricken. Although there may be more susceptibility to a second attack, once a person has been stricken it is unlikely he or she will suffer another attack. The cause of paralysis is not completely understood, but evidence points strongly to a viral infection due to herpes simplex 1. Almost everyone has been exposed to this virus, which causes cold sores.

Common Symptoms: It is not known why some people suddenly develop an inflammation of the facial nerve as a result of the reactivation of this virus, but the theories include triggers such as stress, chronic diseases, infection, or autoimmune diseases. Facial paralysis and related symptoms develop quickly, and in most cases become most severe within a few hours or on the first day of the attack. The most common symptoms of the facial paralysis of Bell’s palsy are drooping facial muscles, difficulty speaking, eating and drinking, and an increased sensitivity to sound, drooling, and facial pain. Common eye problems include such symptoms as too little or too many tears, drooping of the eyebrow or lower eyelid, difficulty closing the eye or blinking, and an increased sensitivity to light. Some patients visit an emergency room fearing a stroke has occurred.

Treatment Options: There are no drugs approved specifically for this condition. If the attack is correctly, and quickly, diagnosed after it begins, antiviral drugs such as acyclovir, famciclovir, valacyclovir, or foscavir (for imrnunocompromised or AIDS patients) can help stop the continuing spread of the viral infection. Corticosteroids such as prednisone have been used to treat the nerve inflammation caused by the viral attack, bul they are not universally accepted as effective. Pain medications can be used in patients with facial pain. It is also very important that the eyes are protected after an attack, since without the proper lubrication, the cornea can become dry and damaged. A visit to an eye doctor is important to maintain a healthy cornea. Artificial tears are often needed when natural tears are not properly produced, and small weights can be used for eyelids that do not close properly. At nighttime, the affected eye can be taped or an eye patch used along with a thick eye lubricant gel to help keep the cornea moist.

Symptoms May Disappear: Patience is the key to treatment, since symptoms will disappear completely without treatment within 3 to 6 months of the attack in about 80% of patients. However, recovery can be slow or fast, and in some patients, symptoms may clear up and then improvement may stop for a period of time. During this period, the nerves begin to heal as the inflammation goes away. Patients often have no movement on the affected side of the face after the attack, and then slowly see small facial movements return. If symptoms remain six months after the attack, the patient is said to have “residual” effects. These residual symptoms often do not improve, but exercise therapy can help patients.