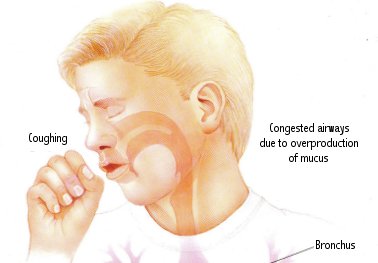 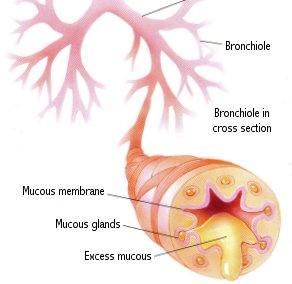 Bronchitis is an inflammation of the lining of the large airways in the lungs. The airways include the trachea and bronchioles (the “tracheobronchial tree”). In acute bronchitis, inflammation is usually the result of an infection in the respiratory tract, caused by a cold or flu virus, or, less often, bacteria. Chronic bronchitis is most often caused by cigarettes or by inhaling dust or chemicals. Inflammation or swelling of the respiratory tract lining results in increased mucus production. Inflammation and excess mucus lead to hoarseness and cough; if a bacterial infection is the cause, fever may occur. Treatment is to control the cough, treat the infection with antibiotics and prevent mucus from drying by drinking fluids.

Both acute and chronic bronchitis are marked by inflammation in the bronchial tubes, excess mucus production and cough.

Acute Bronchitis: A cold or flu virus that settles in the respiratory tract is the usual cause of acute bronchitis. If the common cold virus is the cause, the resulting inflammation is usually less severe than if influenza virus is the cause. Bacteria is a less common trigger, but a bacterial infection may develop after a virus has weakened the lung’s immune system. Cigarette smoke or other pollutants may be responsible for causing acute bronchitis as a complication of a cold or the flu. Studies are being conducted to determine if those individuals who suffer from acute bronchitis are more likely to develop mild asthma.

Symptoms and Treatment: The most common symptoms of acute bronchitis are cough, hoarseness and fever. A dry cough may begin with the viral symptoms of nasal congestion and sore throat. After these symptoms improve, however, the cough continues and worsens, becoming wet and loose, and often the patient is kept awake at night. Fever is not usually present unless there is a bacterial infection. The treatment of acute bronchitis is aimed at controlling the cough. The most effective remedy is a cough suppressant, such as dextromethorphan, known as DM. This drug is available in many prescription and nonprescription products and in liquid and capsule form. It is often combined with the drug guaifenesin, an expectorant, which is used to keep bronchial mucus moist and easier to cough up. Drinking lots of fluids is effective in keeping mucus from drying out. Good cough control means fewer number of coughs during each coughing spell, with each cough helping to remove the excess mucus in the lungs. Antibiotics have not been proven to help in acute bronchitis unless a bacterial infection is present.

Chronic Bronchitis: Cigarettes are the most common cause of chronic bronchitis. When a cough and mucus coughed up from the lungs (known as sputum) are not caused by infection, asthma or other disease, the diagnosis is chronic bronchitis. It is an obstructive lung disease because normal air exchange is blocked by excess mucus. Smoke inhalation and chemical fumes cause constant irritation and excess mucus production and also hinder removal of mucus from the lungs. People with chronic bronchitis are also likely to develop bronchial infections because of constant irritation of the bronchial lining. During these infections, the sputum is often yellow or green and there is shortness of breath. Treatment: Most doctors consider chronic bronchitis to be the diagnosis if all other reasons for symptoms are excluded and the patient coughs up sputum almost every day for three successive months two years in a row. Most people with chronic bronchitis are cigarette smokers, over age 40. The most important treatment after antibiotic therapy for an infection is to stop smoking, or avoid any exposure to dust or chemicals, to remove the irritants that are responsible for causing the cough and mucus. These steps may stop the cough and clear up the inflammation. In more serious cases, bronchodilator drugs or corticosteroids may be required. If chronic bronchitis is left untreated and there is continued exposure to irritants such as cigarette smoke, the patient can develop serious, irreversible lung disease. If you have any questions about medications used to treat a cough, ask your pharmacist or doctor. See your doctor if you have a cough that lasts for more than 10 days.