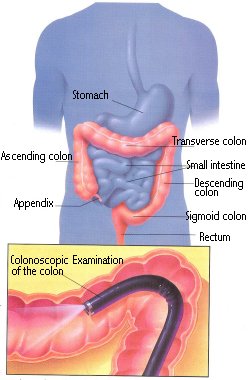 Colonoscopy is a nonsurgical procedure in which a doctor looks at the lining of the lower gastrointestinal tract. This is done with a flexible, lighted tube called a colonoscope, which is inserted into the rectum and moved through the length of the colon to the cecum, near the appendix. Using this tube, the doctor can spot abnormal growths and take a biopsy of unusual looking tissue for later examination, or remove the growth completely, as in the case of small polyps. This procedure can be done in a doctor’s office. Colonoscopy can identify the reason for rectal bleeding and helps those at high risk of developing colon cancer.Colonoscopy is a nonsurgical procedure used to detect abnormalities in the colon.

Colonoscopy is an important procedure developed in the mid-1960s to allow doctors to look inside the large intestine for polyps or other growths or abnormalities without the need to perform surgery. It has been improved significantly over the last 30 years and now can be done in a doctor’s office or outpatient clinic without a hospital stay.

Peering Inside the Colon: Before the flexible colonoscope was developed, doctors could only look at about 10 inches of the colon with an instrument called a rigid proctosigmoidoscope. The rest of the large intestine could be seen through a barium enema x-ray. The barium enema is still used for diagnosis of most large intestinal growths. Colonoscopy is used to take a sample of a growth seen on barium enema x-rays, or to view an area of the colon not clearly seen on the x-ray. A colonoscopy allows the doctor to view the entire colon and is useful to screen for cancerous growths, polyps and ulcers. It is often done before surgery for colon cancer.

Bowel Preparation: It is very important that the patient’s intestines are completely clear, with all solid stool removed from the colon. The inside of the colon cannot be seen clearly if even a small piece of stool is left in the area since it can block the doctor’s view or the colonoscope’s suction device. The doctor will instruct patients who are scheduled for colonoscopy on how best to clean their intestinal tract. Most patients will be placed on a liquid diet for one to two days prior to the procedure. The night before, a laxative, such as castor oil or citrate of magnesia, may be suggested to cause a watery diarrhea (except in patients with ulcerative colitis). Certain patients may be told to use a tap water enema once or twice on the morning of the procedure. Iron preparations should be stopped at least one week before colonoscopy because they can cause black, tarry stools that are not easily removed from the colon. Because aspirin can cause an increase in bleeding, it should be stopped several clays before a colonoscopy in case the doctor removes a polyp.

During the Procedure: Before undergoing a colonoscopy, a drug will be given through a vein to help the patient relax. A pain medication may also be given to dull any pain that occurs from the stretching of the bowel or cramps from the pumping of small amounts of air into the colon to inflate it. Though rare, complications can occur. Breaking through the wall of the colon with the tip of the instrument seldom occurs and would immediately be corrected with surgery. A burn of the area wall might occur where a polyp was removed and the bleeding stopped by heat cauterization, causing abdominal tenderness and fever within six hours after the procedure. Excessive bleeding may occur when a polyp is removed and this will be corrected at the time it occurs. Infection is possible in patients with prosthetic heart valves and antibiotic prophylaxis is required to prevent such infection. After the procedure, the patient may feel groggy for several hours as a result of any medications used. The patient should be accompanied home. Driving is to be avoided for at least eight hours.

If you are scheduled for a colonoscopy, don’t hesitate to ask your doctor or pharmacist any questions you have about the procedure or the medications that may be used.