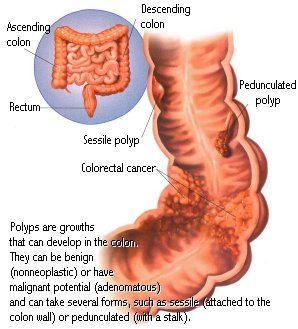 The second-leading cause of cancer deaths in the U.S. is colorectal cancer, which occurs primarily in people over the age of 50. The colon (large intestine) and rectum are located at the end of the digestive tract. Cancers that occur at either of these two sites are similar, and they are referred to as colorectal cancers. Almost all of these cancers begin with the growth of adenomas, a precancerous type of polyp that grows on the inside wall of the colon or rectum. In the early stage of growth, these polyps may not cause any symptoms. As they continue to grow into the intestine and beyond, symptoms such as rectal bleeding, a change in stools, blood in the stool, gas, bloating, abdominal fullness, or weight loss may be noticed. If these polyps are detected early through appropriate screening tests before they become cancerous, they can be removed and the development of colorectal cancer can be prevented. Although there are many effective treatments for this type of cancer, including radiation, chemotherapy, surgery, or a combination of these treatments, the most effective treatment is early detection. Routine screening tests such as fecal occult blood tests, sigmoidoscopy, colonoscopy, and barium enema are recommended for patients at average risk beginning at age 50, or beginning earlier for patients who are at increased risk of colorectal cancer.

Once cancerous polyps are found in the colon or rectum, surgery is usually performed to remove them and any surrounding cancerous tissues. In some patients, a colostomy (resectioning of the colon with an opening outside the abdomen) is necessary. Depending how advanced the cancer is, radiation and chemotherapy may also be part of treatment.

Early detection and treatment have helped cut the death rate from colorectal cancer over the past 20 years. In fact, the 5-year survival rate for people with early-stage colorectal cancer is 90%; survival drops to 65% when the cancer has already spread to other parts of the body. Unfortunately, only about 37% of colorectal cancers are found before they have spread. Patients whose parents, siblings or children have colorectal cancer face an increased risk, as do women with a history of cancer of the ovaries or uterus. Colorectal cancer is also more common in patients who suffer from inflammatory bowel diseases such as ulcerative colitis or Crohn’s disease. Although noncancerous polyps of the colon and rectum are relatively common in people over age 50, the presence of adenomas (precancerous polyps) increases the risk of colorectal cancer. The majority of colorectal cancers are found in people over age 50. Polyps in the colon or rectum are slow-growing, and many are not cancerous; the polyp that can become cancerous is a special type known as an adenoma. In their early stages, polyps do not usually cause any symptoms, making it difficult to detect them. When symptoms do appear, they are typically changes in bowel movements. These symptoms may also be signs of other conditions, and may be ignored or not reported to the doctor.

Screening for Colorectal Cancer: Screening tests for colorectal cancer should begin at age 50 for people of average risk, and up to 10 years earlier for those at high risk. Screening tests are the most important step one can take to lower the risk of colorectal cancer. These tests include: Fecal occult blood test, a simple yearly test of the stool performed in the office, or one may use a home kit that allows samples to be mailed back to the doctor for analysis. Although this test is inexpensive and easy to carry out, several factors can interfere with its accuracy.Sigmoidoscopy involves use of a lighted, flexible tube to examine the lower colon and rectum for polyps or cancerous growths. Preparation for this test is limited to a rectal enema prior to the exam. No anesthesia is required, and after-effects usually consist of mild gas pains. This test is recommended every 5 years beginning at age 50 for those at average risk. With colonoscopy, a lighted, flexible tube with a camera is used to examine the entire colon and rectum for polyps. Preparation includes a complete cleansing of the bowel. A mild sedative is used, and after-effects are usually limited to mild cramping. If a polyp is discovered, the gastroenterologist can remove it with a wire loop and it can be sent to the laboratory for analysis. This test is recommended every 10 years for people at average risk. Double-contrast barium enema entails a special X-ray of the entire colon and rectum. Prepping with an enema that contains a dye can show any abnormalities in the outline of the colon and rectum. Cramping and the urge to defecate may be felt during this test. The double-contrast barium enema is sometimes used as a substitute for a colonoscopy, and is recommended every 10 years for people at average risk.

Prevention: A fiber-rich diet (fruits and vegetables such as cabbage, broccoli, cauliflower, and brussels sprouts) can reduce the risk of colorectal cancer. Foods high in fats, especially saturated fats, should be avoided. Exercise is also recommended. Aspirin, ibuprofen, folic acid and calcium are being studied to see if they may play a role in prevention.