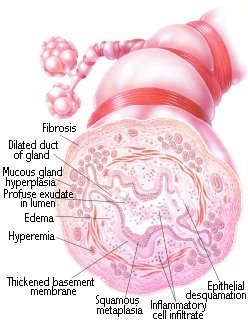 Cigarette Smoking Is a Major Cause

Chronic obstructive pulmonary disease (COPD) is a general term used when a patient suffers from airway obstruction that is not reversible. COPD patients include those with chronic bronchitis, emphysema, or both of these respiratory conditions. Patients with COPD can also have asthma, a reversible airway obstruction, complicating their condition. The majority of patients with COPD have both chronic bronchitis and emphysema. The highest risk factors for developing COPD in the U.S. are cigarette smoking and aging. Workplace or environmental pollution with chemical fumes or dust is another source of obstructive airway disease. The typical patient with COPD begins showing symptoms of chronic cough with sputum in their 40s or 50s. In their 50s and 60s, they visit the doctor with symptoms of shortness of breath. A diagnosis of COPD is based on the patient’s history of symptoms, chest x-ray, and pulmonary function (“breathing”) tests. Treatment is aimed at preventing further worsening of symptoms by avoiding smoking, pollution or other triggers of symptoms, including infections. Proper nutrition and exercise also help the patient with COPD to lead an active, productive life.An increase or decrease in sputum (saliva and other respiratory tract discharges), a change in thickness or color of the sputum, swollen ankles, difficulty sleeping, excess tiredness, or increased shortness of breath are all symptoms of COPD.

A thorough physical exam, including a history of the patient’s symptoms, are used to diagnosis COPD. A chest x-ray helps to exclude other lung conditions with similar symptoms, such as lung cancer or tuberculosis. Changes due to emphysema in the airways can be seen on chest x-ray except in the mildest cases. Pulmonary function testing provides valuable information about the amount of obstructive lung disease and is useful in monitoring its progression. Two major diseases associated with COPD are chronic bronchitis and emphysema.

Chronic Bronchitis: Chronic bronchitis is an inflammation of the lining of the large airways in the lungs, typically caused by constant irritation. The inflammation and swelling causes an increase in mucus production, leading to a productive cough with sputum. The diagnosis is made if a patient has a productive cough for three months of the year two years in a row. The primary causes of chronic bronchitis are cigarette smoking and environmental pollution. In chronic bronchitis, air exchange is blocked by excess mucus and swelling of the lining of the airways. Patients with chronic bronchitis are prone to bacterial lung infections, during which usually clear sputum turns white, yellow or green, and shortness of breath increases.

Emphysema: The primary causes of emphysema are cigarette smoking, air and workplace pollutants, and heredity. In emphysema, lung tissue is weakened and destroyed, causing air spaces to become larger and making it more difficult for air to be exchanged in the lungs. The lungs become less elastic, and over time it becomes more difficult to release carbon dioxide and to obtain oxygen. Emphysema develops slowly; the first symptoms are shortness of breath after light activity. Patients with severe emphysema experience a cough with very little sputum, weight loss, frequent lung infections, and have great difficulty breathing.

Treatment: The first step in treatment is to avoid all lung irritants, including cigarette smoking. Since COPD patients are at high risk of complications from the flu, annual influenza vaccinations are important. Pneumococcal vaccine is also used to prevent pneumonoccal pneumonia. A good nutritional plan should be followed, since many patients with advanced COPD lose weight and need to maintain their respiratory muscle strength as well as overall muscle strength and endurance. A conditioning exercise program is also useful to achieve this goal. The damage to the lungs in patients with COPD is permanent, and cannot be reversed with medication. However, COPD patients often find some relief from bronchodilating drugs that are inhaled into the lungs. Bronchodilating drugs include beta-agonists (metaproterenol, albuterol, terbutaline, and pirbuterol), anticholinergic drugs (ipratropium) and theophylline. Oral or inhaled corticosteroids may decrease inflammation in certain patients. Antibiotics are used whenever symptoms of an infection (increased cough, change in sputum, increased shortness of breath, and/or fever) begin. To prevent drying of mucus, patients should drink plenty of fluids. Oxygen therapy can also make COPD patients feel more comfortable and allow them greater freedom in their daily living. If you have COPD, be sure to call your doctor if you experience any change or increase in symptoms. If you have questions about your medications, be sure to ask your pharmacist.