Cigarette Smoking Is the Leading Cause 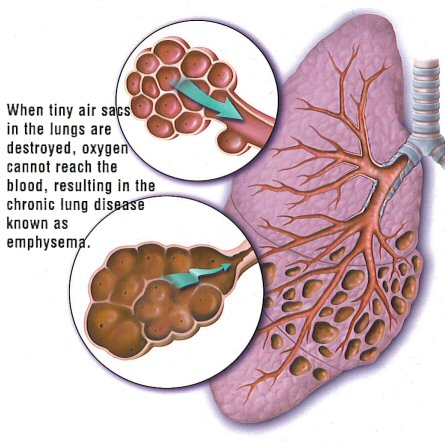 Emphysema is a chronic lung disease and one of two forms of chronic obstructive pulmonary disease, or COPD. (The other form is chronic bronchitis.) About three million Americans suffer from emphysema. The most common causes of emphysema are years of cigarette smoking and exposure to environmental toxins. In emphysema, millions of tiny air sacs in the lungs become enlarged and eventually are destroyed. Since these air sacs, known as alveoli, are critical to oxygen and carbon dioxide exchange, their destruction leads to a decrease in the level of oxygen in the blood and to higher levels of carbon dioxide. The result is shortness of breath, which becomes more pronounced after many years. Eventually, the disease may lead to heart failure. Emphysema is a permanent and serious condition, and it cannot be reversed, although the symptoms can be relieved to some extent by medications. Drugs known as bronchodilators are somewhat effective and are prescribed to ease breathing. Inhaled or oral corticosteroids are also prescribed, as is oxygen therapy. Some patients with emphysema have an inherited form of the disease due to a deficiency in a protein known as alpha-1-antitrypsin. However, this genetic factor is responsible for the condition in only a small group of patients.

Destruction of air sacs reduces the level of oxygen in the blood. The most effective treatment for emphysema is to stop smoking, which can slow the progression of shortness of breath.

Emphysema is a disease in which the 300 million air sacs (alveoli) that make up the lungs become irreversibly enlarged and their walls destroyed. Oxygen and carbon dioxide are exchanged rhrough these air sacs, and when the sacs are broken down, it becomes difficult for oxygen to reach the bloodstream. At the same time, the elastic fibers that help the lungs expand and contract during breathing are slowly destroyed. Without this elasticity, it becomes difficult for patients to exhale.

Primary Symptoms: The primary symptom in patients with emphysema is shortness of breath. In the beginning, most patients notice this during exercise or activity. Eventually, even simple tasks like walking up stairs become difficult. Many patients with emphysema also suffer from chronic bronchitis, which causes a productive cough. Emphysema is diagnosed after physicians take a complete history of symptoms and perform a thorough physical examination. The physician may order a chest x-ray to visualize lung tissue. Pulmonary function tests (PFTs) are used to measure the breathing ability of the lungs. Patients may also be tested for a protein deficiency in the blood, especially if symptoms of emphysema begin before age 50.

Treatment: Treatment is aimed at relieving symptoms while slowing the destruction of alveoli. It is important for patients to maintain general good health in order to avoid respiratory infections, which can worsen their symptoms. This means patients must follow a healthy diet and maintain a certain level of activity. Although these are not easy goals for a patient who must work hard to breathe, they are critical to maintain respiratory and muscle strength. When first diagnosed, the cause of the emphysema is determined and exposure to any lung irritants is assessed. Patients who smoke must stop. All environmental pollutants must also be avoided. Patients can help prevent respiratory complications by receiving the influenza vaccine each year and the pneumococcal pneumonia vaccination, which is repeated six years later.

Bronchodilators: Drugs that help open bronchial passageways and ease breathing are known as bronchodilators. In most patients, however, these drugs, which include albuterol, pirbuterol, metaproterenol, and terbutaline, are only somewhat effective. Theophylline and ipratropium are also bronchodilators, but they work by different mechanism. Since many bronchodilators work differently, they can be used together to increase their effectiveness.

Other Therapies: A number of patients with chronic lung disease may show improvement with use of corticosteroids, given either by mouth or by oral inhaler. These drugs should be used only if they lead to an improvement in pulmonary function tests. Sometimes, if symptoms worsen, corticosteroids are prescribed for a short time. Antibiotics are also used to combat respiratory infections that cause an increase in cough, shortness of breath, or fever. Oxygen therapy is used in patients with disabling emphysema who are unable to do simple tasks. The type of oxygen delivery system and the rate of oxygen delivery are prescribed based on each patient. Single lung transplants are the end resort for eligible patients. Experimental procedures such as a resection of the lungs, which removes the most damaged areas of lung tissue, are being studied as a surgical treatment for end-stage emphysema. In most cases, emphysema is preventable by not smoking and by avoiding environmental pollutants.

Contact your physician at the first sign of respiratory infection or anytime breathing becomes difficult. Your pharmacist can answer any questions you may have about your medications.