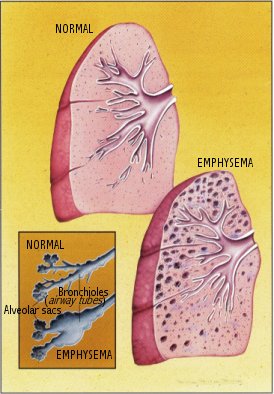 Emphysema is a chronic lung disease which causes permanent changes in the lung, making it difficult to breathe normally. Smoking and air pollutants are two main causes of emphysema. Damage to the lung occurs in the area where air is exchanged, past the terminal bronchiole, including the respiratory bronchioles, alveoli and alveolar sacs.

Destructive changes in the lung are not reversible. The best prevention is not to smoke and to avoid air pollutants.

Emphysema is a disease of the lungs. Tissue in the lungs is weakened and destroyed, air spaces become larger and less air can be exchanged through the alveolar walls. In some people with emphysema, the walls of the respiratory bronchiole become weakened and can collapse when air is exhaled. In others, the small bronchi of the lung are destroyed. The lungs become less elastic as the alveoli are destroyed and it becomes more difficult to exchange air. These changes occur slowly and cannot be reversed. The primary causes of emphysema include cigarette smoking, air and occupational pollutants, lung infections and heredity. Cigarette smoking is the most offensive. Severe emphysema is seen in heavy smokers as well as those living in areas where air pollution is high. Lung infections probably do not cause emphysema, but make it much worse once the changes of emphysema have begun. There is also a proven hereditary link in the development of some cases of emphysema, which is more common in women and begins in their 30s and 40s. In those people prone to emphysema due to heredity, cigarette smoking increases the development of symptoms at an even faster rate.

Mild emphysema may be seen in an aging person’s lungs. It occurs in many adults to some degree after age 50, but most changes are mild and symptoms never develop.

With moderate emphysema, the most common symptom is shortness of breath after light activity or even at rest. As emphysema becomes more severe, weight loss, a cough with very little sputum and more frequent lung infections may occur. In some people, emphysema worsens rapidly; in others, the disease may progress more slowly.

Treatment: There is no specific treatment for the symptoms of emphysema. The goal is to prevent the lung changes from worsening and allow the patient to lead a normal and productive life. The best prevention of these destructive changes to the lung tissue is to eliminate smoking and exposure to pollution in the atmosphere or workplace. Other goals are to avoid infections that lead to worsening of the lung damage and to avoid situations which lead to episodes of severe symptoms. Many patients benefit from atmospheric control methods such as avoiding pollutants and properly humidifying the air in their homes. Patients should be taught proper breathing techniques, proper nutrition and methods to improve and maintain their physical fitness.

Unfortunately, emphysema is an irreversible process which is not treatable by medication. However, there are bronchodilating drugs which may help any reversible obstruction to breathing. These drugs may be taken orally or inhaled directly into the lungs. Oxygen therapy is often used in treatment. Be sure to tell your pharmacist when you are selecting an over-the-counter medication, since certain drugs may worsen your symptoms.