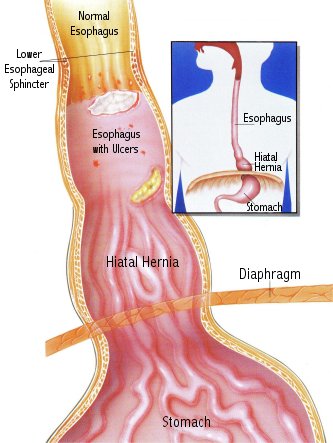 When the stomach contents back up into the esophagus, gastroeso-phageal reflux and “heartburn ” occur.

Esophagitis Can Be Painful

Gastroesophageal reflux occurs in almost everyone, although not everyone experiences its symptoms. The stomach’s contents contain a mixture of gastric acid, pepsin, enzymes, bile salts and other contents that can cause irritation of the esophageal wall. Over time, an inflammation of the esophagus develops, causing the condition known as esophagitis. With continued exposure to the stomach’s contents, bleeding and small ulcers can develop on the esophageal wall. The most common symptom people with reflux complain of is referred to as “heartburn,” but some may experience a “sour stomach,” indigestion or painful swallowing. Some persons experience severe chest pain similar to a heart attack. Reflux most often occurs when the stomach is very full, such as after a large meal, and when one is lying down. If reflux continues without treatment, esophagitis can cause the chronic failure of the lower esophageal sphincter (LES), thus setting up a cycle that perpetuates esophageal reflux.

Factors Aggravating Reflux: Esophagitis is made worse by wearing tight, binding clothes, obesity and pregnancy. Hiatal hernia and reflux esophagitis are unrelated conditions, but sometimes occur together in the same patient and the result is often an aggravation of esophagitis. The predominant cause of esophagitis is a faulty lower esophageal sphincter. Overeating and drinking carbonated beverages will increase the volume of the stomach’s contents and raise intragastric pressure. Smoking, fatty foods, chocolate and coffee will cause the lower esophageal sphincter to relax (allowing the backflow of acid), as will the use of some medications, such as theophylline, diazepam, veraparnil and isoproterenol.

Treatment: There are three principal ways to treat gastroesophageal reflux and the esophagitis it causes: 1) changing one’s lifestyle; 2) medications; and 3) surgery. Change of lifestyle is important. The inflamed esophagus can heal if one eats small meals slowly, and avoids a reclining position after meals. It is often helpful to elevate the head of the bed on 6-inch blocks. Overweight patients should lose weight and loose clothes should be worn. Anything that causes the LES to relax should be eliminated. This means not smoking and avoiding the use of the foods described above.

Medication: The drugs used to treat gastrointestinal reflux and esophagitis either tighten the lower esophageal sphincter or help to neutralize the stomach’s contents (or both). Antacids, bethanechol and metoclopramide all help the LES to keep the stomach’s contents from refluxing into the esophagus. Drugs such as cimetidine, famotidine, nizatidine, ranitidine and sucralfate may also be useful in treating reflux by neutralizing the stomach’s contents. Omeprazole is a newer drug that treats reflux by stopping acid secretion in the stomach completely.

Surgery: Although surgery can be done to correct reflux, it leaves the patient unable to belch or vomit. It is used only when lifestyle changes and medication do not work. For occasional heartburn symptoms, see your pharmacist for advice on over-the-counter therapies. If you suffer from heartburn often, or find you are taking antacids frequently, be sure to see your doctor for evaluation and treatment.