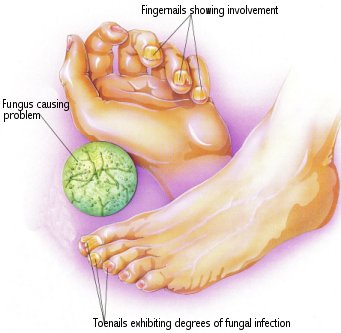 Fungal infections of a fingernail or toenail (onychomycosis) are caused by one of three fungus types: dermato-phytes (usually cause of a toenail infection), yeast or molds. The nail often becomes thickened and turns white, yellow or brown. Sometimes the proximal nail fold – the area of skin next to the cuticle – becomes infected. A culture will confirm the exact cause of the infection. The nail bed (tissue under the nail) is the infection site and topical medicine applied to the nail will not reach the infected area. New oral drugs are now available to treat infections, but they take time to work. They must he taken once or twice daily for 6 weeks to 4 months for fingernails and 12 weeks to 6 months or longer for toenails.

Fungal infections can be diagnosed by a medical professional looking at a nail scraping under a microscope and growing a culture.

A fungal nail infection can be embarrassing and a cause of concern, but is rarely a serious health problem. Nail infections can strike at any age and affect both men and women equally. They occur most often in people who wear poorly fitted shoes, use public bathing facilities, or whose nails are exposed to excessive moisture or injury. People with diabetes, poor circulation or poor functioning immune system can also be affected.

Cause and Appearance: Almost all fungal infections of fingernails are caused by yeast, such as Candida albicans, while almost all toenail infections are caused by dermatophytes. As a result it is rare to have both fingernails and toenails infected at the same time. Often the skin next to the affected nail is also infected. Several patterns of infections are seen. The most common is the thickening of the nail, with a color change to white, yellow or, rarely, brown. In some cases, the nail does not thicken but becomes covered with small cracks. Other infections result in the nail surface being covered with layers of crumbly white plaques. The proximal nail fold, or area beyond the cuticle, becomes infected in case of relapse or in immunosuppressed patients, such as those with AIDS. Psoriasis and other diseases may mimic a fungal infection of the nail, and a doctor must confirm the diagnosis with a laboratory test before beginning treatment.

Diagnosis: Although a nail may appear to be infected by a fungus, a diagnosis should be confirmed by a physician. The infected nail will be scraped and the nail sample examined under a microscope to identify the specific cause of infection. The sample scraping is also grown in a culture to confirm the exact fungus that is responsible. This is very important because only when the fungus is correctly identified can a physician select the right drug for each case.

Treatment Options: Prior to the introduction of the antifungal drug itraconazole, doctors had a difficult time treating fungal nail infections. Products applied to the nail rarely cured the infection because they could not penetrate through the nail to reach the infected nail bed. The standard oral drug for fungal infections, griseofulvin, had to be taken twice a day for up to six months for fingernail infections and a year for toenail infections. Although removal of the nail was a widely used surgical procedure at one time, it is not performed today except in the most severe cases, and if it is done, is combined with oral therapy since the new nail will also be infected unless the nail bed tissue is treated. Newer and more effective oral antifungal medications, such as itraconazole, are now available that not only penetrate into the infected nail bed and nail plate but remain in the nail up to six months after the medication is stopped. These drugs cure the infection, but treatment time is long, up to six months in duration. Your physician will explain how to take your medication properly. Although treatment is safe and effective, each drug has a unique set of side effects that require follow-up with laboratory testing during or at the end of therapy. Your physician and pharmacist should also be advised about other drugs you are taking to avoid drug interactions.

Patients must report to their doctor any problems they experience while taking an antifungal drug. Patients should understand that the treatment is long and could be expensive. If you have any questions about treatment and side effects, be sure to ask your physician or pharmacist.