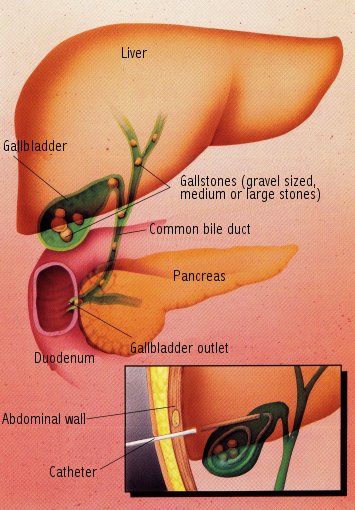 Pain May Not Be a Symptom

Gallstones are common in middle age and beyond and usually affect overweight women. Severe pain may occur as these stones are pushed out of the gallbladder and into the common bile duct. Therapy consists of surgery or drug therapy. A newer technique is to infuse a drug via a catheter placed directly into the gallbladder over a one- to two-day period to dissolve the stones.

Gallstones may be present in the gallbladder for years without causing any problems.

Gallstones Are Common after Age 40

Patients most likely to develop gallstones are women over age 40 who are overweight and have had pregnancies. The risk of gallstones increases with age.

Gallstones are formed in the gallbladder, a sac near the liver that receives bile, concentrates it, and sends it to the duodenum through the common bile duct when a meal is eaten. The particles known as “gallstones” are usually made up of cholesterol, but some are calcium salts. Cholesterol is found in bile, and if the bile becomes too saturated with cholesterol, gravel-like stones form in the gallbladder. These particles can be small, medium sized or large. If a stone tries to pass out of the gallbladder, it may move easily into the duodenum, or it may squeeze through the common duct and cause severe pain. If a stone becomes lodged in the common duct, the gallbladder may become inflamed (known as cholecystitis), or the ducts may become infected. A blocked bile duct may also result in jaundice, or a yellowing of the skin, from the backup of bile pigment in the bloodstream.

A gallstone that is blocking the gallbladder outlet, or is trapped in the common duct, causes severe pain in the upper right abdomen that radiates to the shoulder. This pain is steady and continues for hours, usually beginning an hour or so after eating and may even awaken the patient from sleep. It is often accompanied by nausea and vomiting.

Symptoms: Stones in the gallbladder (cholelithiasis) may cause no symptoms, or the symptoms may not begin until years after they form. There is often tenderness in the upper right abdomen, with a full feeling after a heavy meal, and bloating and belching, especially after eating fried foods. These symptoms, however, can be due to many causes.

Gallstones are most often diagnosed by cholecystography(an x-ray procedure) and ultrasound testing to determine if the gallbladder is functioning, if stones are present, and if they are made of cholesterol or are calcified. If jaundice is present, other tests will be done to determine the cause.

Treatment: In some cases, surgery is indicated to remove the gallbladder. This surgery, called cholecystectomy, eliminates the problem of developing future gallstones. A recently developed drug that dissolves cholesterol gallstones is used in some patients, especially those in whom surgery is a risk. This drug, called chenodiol or CDCA, is effective in dissolving gallstones made of cholesterol (not those that are calcified) when used for 6 to 12 months or up to 24 months. Patients must be monitored carefully during and after their treatment, since over half of all patients treated will develop gallstones again within five years after stopping the drug therapy. Chenodiol must be monitored closely because it may damage the liver. This drug should not be used in women who are pregnant or who could become pregnant. Other drugs with a similar action to chenodiol, but with fewer side effects, are being studied. 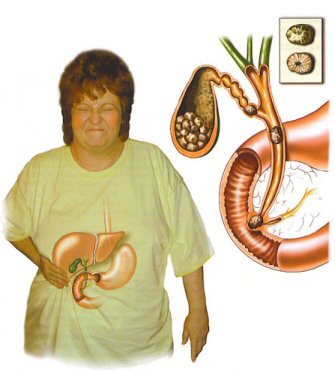 Bile Can Harden to Form Stones

The gallbladder is a small sac connected to the liver and the intestine by tubes known as ducts. The purpose of the gallbladder is to store bile. Bile is a liquid made by the liver to help digest food in the intestines. It is made up of bile salts and lecithin, which help break up fats in the food we eat. Bile also contains cholesterol (a type of fat) and bilirubin (a waste product). When bile is needed to help digest food after a meal, the gallbladder contracts, pushing the bile into the intestine. Once food is digested, the gallbladder relaxes and begins to store bile again from the liver until the next meal. For reasons that are not entirely clear, small amounts of bile can harden and form solid “stones” known as gallstones. Gallstones are usually made up of cholesterol (80% of gallstones) or bilirubin (20% of gallstones). These stones can range in size from tiny pebbles to golf balls. Most people with gallstones have either no symptoms (“silent gallstones”) or complain of sharp pain on the right side of the chest to underneath the collarbone, especially after fatty meals. Gallstones can also cause serious infections in the bile duct or pancreas if they leave the gallbladder and become lodged in the common bile duct or pancreatic duct.

Each year, about one million new cases of gallstones are diagnosed in the United States. Half of these patients undergo surgery, known as choltcystectomy, to remove their gallbladder.

Gallstones are a relatively common condition affecting 10% to 15% of Americans. More men than women are stricken, and there are verv high rates in Native Americans and Mexican-Americans. Obesity, age, a high-fat/low-fiber diet, crash diets or periods of fasting, and a family history of gallstones all increase the risk of gallstone formation. Estrogen levels are also linked with gallstones, since the stones form more often in women who are pregnant or who take birth conttol pills or hormone replacement medication. Both obesity and high estrogen levels can cause slower gallbladder emptying. High estrogen levels may lead to increased cholesterol levels in the bile, which is also true for people who take cholesterol-lowering drugs, since these medications increase the amount of cholesterol secreted in bile. People with diabetes often have high triglyceride levels, which can increase the risk of forming gallstones.

Symptoms Don’t Always Appear: Many people with gallstones do not have any symptoms. Gallstones are often discovered when patients undergo testing for other conditions. In most cases, these patients do not need treatment. Symptomatic gallstones can cause sharp pain that may slowly worsen and then slowly improve over several hours. The pain from gallstones most often is felt on the right side of the upper abdomen. It can also shoot up to just below the right shoulder blade. Often the pain is associated with nausea or vomiting. In some patients, often after a high-fat meal, bloating, gas, and an uncomfortable feeling of fullness are present.

The diagnosis of gallstones is made after a history of symptoms is taken, along with blood tests. X-ray tests and abdominal ultrasound screenings are also helpful. The oral cholecystogram, or OCG test, is specific for gallbladder disease. In this test, oral dye is swallowed so the gallbladder can be seen on x-ray. These tests are useful if the gallstones are still in the gallbladder. If gallstones have moved into the common bile duct, other specialized tests must be used to see the stones on x-ray.

Medications: In some patients with small cholesterol gallstones, oral medications (either ursodiol or chenodiol) can be used to dissolve the gallstones. These drugs, which must be used for months and even years, can cause diarrhea. Patients who have only one or two larger cholesterol gallstones can be treated with lithotripsy, a sound wave technique that disintegrates the stones in the gallbladder The tiny pieces of gallstones then must be dissolved with medications. A chemical called methyl terbutyl ether can be injected into the gallbladder to dissolve the stones, but this method has had complications reported with its use. In up to half of all patients treated with nonsurgical methods, gallstones return after treatment. The other treatment option is surgery, either by open surgery or laparoscopy. In the US today, the vast majority of gallbladder surgery is laparoscopic cholecystectomy: A tiny camera and small instruments are inserted into the abdominal cavity through several small slits, avoiding an incision into the abdominal muscles. It means typically only one night in the hospital, a much quicker recovery and less pain, and no large and unsightly scars. Open cholecystectomy is safe but requires a 5- to 8-inch cut through abdominal muscle tissue. Naturally, this major surgery requires a longer hospital stay (five to seven days) and recovery is slower. Since the gallbladder is not a vital organ, there are usually no problems after it is removed, and for most patients, there are no resulting dietary restrictions. In a very small percentage of people, diarrhea can occur, since bile is no longer stored in the gallbladder but flows directly from the liver through the common bile duct into the small intestine.