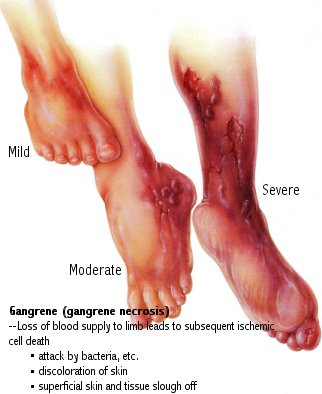 Pain Is Not Always Present

Gangrene is a condition that develops when tissue dies, due to a bacterial infection, vascular disease such as diabetes, or injury to an area. Tissue death occurs because the blood supply to the area is blocked. “Wet” gangrene is caused by a bacterial infection; “dry” gangrene is caused by other factors. Gangrene most commonly occurs on the toes, feet, and legs; and the fingers, hands, and arms. The most dangerous place for gangrene to develop is the intestines or stomach, where it can be life-threatening.

Gangrene first shows up as pale skin, followed by red, then green color and progresses to blackened skin. Symptoms include swelling, sensation of air bubbles under the skin, bad smelling discharge, and fever if infection is present. The affected area may be painful, or there may be no sensation at all. Because advanced gangrene can cause loss of parts of the body, it is vital to discover the condition early. Gangrene can be treated with antibiotics if it is due to an infection, and surgery to remove dead tissue. It is important to know how to prevent gangrene from developing.

Gangrene, or tissue death, can occur whenever the blood supply to an area of tissue is blocked. Any condition that leads to poor circulation, even aging, can increase the risk of gangrene. There are two types of gangrene: “wet” gangrene, caused by bacteria, and “dry” gangrene, which results from another cause of tissue destruction. Gas gangrene is a type of wet gangrene caused by a bacterium that produces a gas as its byproduct. Gangrene can be caused by an infection with Clostridia perfringens, an anaerobic bacterium that produces gas as a byproduct. Other causes can include diabetes, any crushing injury that cuts off blood supply, surgery, puncture wounds, frostbite, and burns. Gangrene in the gastrointestinal tract may be caused by a ruptured appendix or gallbladder, or a herniated (twisted) bowel. Even a blood clot or hardening of the arteries can lead to gangrene in the tissue that was supplied with blood by those arteries.

A Leading Cause Is Diabetes: One of the major risk factors for gangrene is diabetes. Two other diseases that affect blood circulation, Raynaud’s syndrome and Buerger’s disease, are also leading causes. All of these conditions can cause a decrease in blood supply to tissues, especially in the fingers, hands, toes, and feet. During the winter months, exposure to cold decreases blood circulation and can lead to development of gangrene, especially in those already at high risk. Smoking is another risk factor that affects blood circulation. Heavy alcohol consumption also interferes with blood supply because alcohol affects blood vessels.

What Are Signs and Symptoms? Signs and symptoms of gangrene may begin with pale skin that changes to red and then green. There is a swelling of the affected area, and a sensation of air bubbles under the skin. Eventually there is blackened skin. The area may give off a foul odor from the decaying tissue. There may be pain or no sensation at all in the area. If infection is present, a fever may be present. Other signs of infection include warmth, redness, swelling, and pain. If gangrene is present in the gastrointestinal tract or abdomen, there will be severe abdominal pain. Gangrene in the GI tract is a life-threatening condition.

Diagnosis and Treatment: Gangrene is diagnosed by a doctor, who cultures the tissue in the affected area or examines blood cells for an infection. An X-ray is used to look for gas inside the tissue. If treated early in its development, gangrene can be treated with antibiotics (for gangrene caused by bacteria) and surgery to remove the dead tissue. Pain medications are also used, and blood thinners may help to prevent blood clotting. The patient is usually hospitalized and kept in bed until the gangrene stops its spread. A diet that is high in protein and calories is used to help repair the damaged tissue. If not treated promptly, complications of gangrene could be the amputation of a limb, a blood infection, shock, blood clotting disorder, and even death. The best strategy is to prevent gangrene from developing. Patients with circulation disorders, including diabetes, should examine their feet regularly for any signs of infection. People at high risk should not smoke, drink alcohol only in moderation if approved by their doctor, and visit their doctor promptly when signs of infection are noticed in an area of skin injury. After frostbite or burns, antiseptic care recommended by the physician should be followed. Questions about continued and follow-up care can be answered by the doctor or a pharmacist.