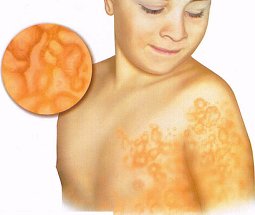 Hives are the common term for a skin condition known asurticaria. These red, swollen, and itchy welts appear suddenly on the skin’s surface in reaction to the systemic or topical stimulation of the immune system. This reaction leads to the release of histamine�a substance found in the mast cells of skin that causes fluid to leak from blood vessels into the surrounding tissues. Hives are often difficult to describe because they can he large or small, in irregular patches or circular, raised areas, and they can appear anywhere on the skin. They can even change their appearance within hours, disappearing and reappearing in different locations.

Hives are usually the result of a reaction to food, medication, or an infection. Hives can also appear after direct stimulation of the skin, such as vigorous scratching that produces a welt, intense pressure from tight clothing, or exposure to cold water, bright sunlight, or a hot shower.

Most cases of hives are acute, occurring over a day or two up to a few weeks and then disappearing. If hives continue beyond a period of six weeks, however, they are considered chronic. In these cases, a thorough evaluation by an allergist or immunologist is warranted.

Hives are a relatively common occurrence and usually do not pose a medical danger to patients. However, hives can appear during a serious allergic reaction that requires immediate attention. When the skin reaction of hives is accompanied by swelling of the face, eyelids, or mouth or difficulty breathing, immediate treatment is needed to avoid a serious anaphylactic reaction.

A Variety of Causes

In some cases, rhe cause of ihe hives is clear. Perhaps they appear following a viral infection or are noticed after taking an antibiotic. It can be frustrating for doctors and patients to determine the cause of hives. In most cases, a cause is never found. Equally frustrating, hives can appear in many forms and disappear and reappear in different locations without warning.

Although all cases of hives have some elements in common, there are several varieties of hives that occur from seemingly unrelated conditions. Hives can be a sign of an allergic reaction to a food or drug or can result from an infectious disease, such as an upper respiratory infection or mononucleosis. Hives can also be caused by a physical stimulation of mast cells under the skin’s surface, causing an exaggerated swelling with the scratching of skin or rubbing of tight clothing. For some people, a hot shower or intense physical exercise can lead to the appearance of hives. Exposure to extreme cold can also cause hives. Even exposure to direct sunlight can cause hives in patients who are prone to this reaction.

Most cases of hives disappear on their own without requiring treatment. In cases that persist or cause intense itching, hives can be treated with oral or topical antihistamines. Antihisramines work by stopping the histamine reaction that causes the redness, swelling, and itching. There are several nonprescription antihistamine medications available, including diphenhydramine, clemastine, and chlorpheniramine, as well as prescription-only antihistamines, such as hydroxyzine and cyproheptadine. However, these antihistamines may cause significant drowsiness, making concentration and driving difficult, if not dangerous. Antihistamines that are less sedating, such as fexofenadine, cetirizine, or loratadine, are sometimes combined with a sedating antihistamine for oral therapy. Topical creams and lotions with antihistamines or corticosteroids are also available, although they are not as effective as oral medications. In severe cases, oral corticosteroids may be used for a short period of time to help loratadine control the immune reaction.

Ask your pharmacist if you have questions about hives and the prescription and over-the-counter medications used to treat this skin condition.