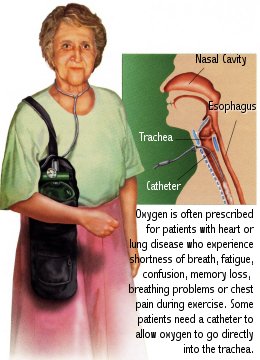 Oxygen is required by every cell in the body. The air we breathe provides enough oxygen for our bodies to function, but for persons with certain lung and heart diseases, the body’s tissues may not get a sufficient amount of oxygen. In lung disease, oxygen may not be able to pass easily from the lungs into the bloodstream. In certain heart diseases, the heart may not be able to pump sufficient oxygenated blood to the organs and tissues of the body. In both of these situations, lack of oxygen can cause a number of physical symptoms, such as shortness of breath, fatigue, inability to exercise, memory loss and confusion. Home oxygen therapy is often prescribed to relieve the symptoms caused by insufficient oxygen in the blood. Supplemental oxygen therapy can also be helpful for short periods of time in some patients who suffer from serious respiratory illnesses. Several forms of home oxygen therapy are available to patients: liquid oxygen, oxygen gas, and oxygen that is delivered through a device known as a concentrator. Each has advantages and disadvantages, and the best choice depends on the lifestyle of the patient.

Every cell in the body needs oxygen to survive. Persons with certain lung and heart diseases may need supplemental oxygen that is obtained from devices used at home.

Why Home Therapy Is Needed

Oxygen is an odorless, colorless gas that our bodies require for energy production. The air we breathe contains about 20% oxygen. When air reaches our lungs, oxygen passes from the lung tissue into the bloodstream where it is then circulated throughout the body converting nutrients into energy. In certain lung and heart diseases, insufficient oxygen reaches our tissues and organs, and the body is unable to function properly. In lung diseases such asemphysema, pulmonary fibrosis, and sarcoidosis, oxygen does not efficiently pass from the kings into the bloodstream. In heart diseases such as cor pulmonale and pulmonary artery hypertension, the heart does not efficiently pump oxygen-rich blood to the organs and tissues. Oxygen therapy is often prescribed for patients to use at home to permit increased activity and make daily living more comfortable. In some cases it is needed to ensure life.

Oxygen Therapy: In oxygen therapy, oxygen flows through a small plastic tube attached to the oxygen source. The tube, called a nasal cannula, is placed under the nose. A face mask can be used in patients who need a large amount of oxygen. For patients requiring a high flow rate for a long period of time, a thin tube, called a transtracheal oxygen catheter, is placed in the neck to allow oxygen to go directly into the trachea, or windpipe. Oxygen for home use is prescribed by a doctor who indicates the flow rate of the oxygen (how fast it comes through the tubing) and how long it should be used (as needed, during sleep, 24 hours each day, etc.). The prescribing doctor will often measure oxygen in the blood before and during oxygen use to be certain the patient is getting the right amount. Oxygen in the blood can be measured by a method known as oximetry, which is a painless and easy procedure involving use of a small clip on the hand, toe, or earlobe. Arterial blood gas measurement is a more complete test involving a blood sample taken from an artery in the wrist.

Available as a Liquid and Gas: Home oxygen is available as a liquid or gas. Liquid oxygen, the most portable of all forms of oxygen therapy, is ideal for use in active people. It is also used by patients who need a higher flow of oxygen (greater than 5 liters per minute). Oxygen gas is cooled and compressed into a liquid, and is stored in a Thermos-like tank, which can be refilled. Smaller containers can be taken outside the house. These lightweight tanks weigh between 6 and 15 pounds, can be worn or placed on a wheeled cart and provide enough oxygen for up to eight hours of use. One disadvantage of liquid oxygen is its shorter storage period, since it slowly evaporates during storage. Oxygen gas is stored in heavy steel pressurized tanks. There are portable versions of these tanks but they must be refilled by an oxygen supplier. These tanks are best for patients who only need oxygen occasionally. The oxygen in these tanks is stable and can be stored for a long time.

Oxygen concentrators remove oxygen from room air by trapping it in a fine filter. They work best for patients who require a low flow rate of oxygen, less than 5 liters per minute. The oxygen is administered through a nasal cannula or mask. Although oxygen is not addictive, it is possible to breathe in too much. Symptoms of breathing in too much oxygen, such as headache, drowsiness, and confusion, should be reported to your doctor.