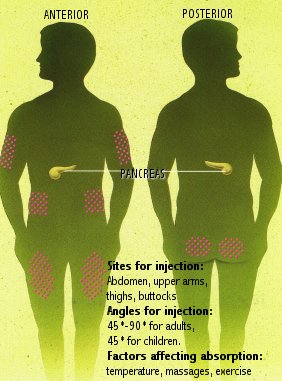 The Abdomen Is the Best Site

Insulin must be injected properly in order for it to be most effective. It is important to inject insulin into the body at a site where it will be absorbed properly.The best sites for such injections are the abdomen or thighs. It is also important to rotate the sites used to prevent “hardening” of tissue under the skin, thus making it more difficult for insulin to be absorbed.

Injection sites recommended for insulin include the abdomen, for fastest absorption, and also the upper arms, thighs and buttocks.

Proper injection of insulin is a key to its most effective utilization by the body. One of the most important factors in the proper use of insulin is the injection site. Researchers are working on the development of methods to administer insulin orally, but for the present, patients with diabetes who need to give themselves insulin to control their blood sugar must inject it. It is important to know which body sites are best suited for injections and factors that affect the rate at which insulin is absorbed into the body.

An insulin injection should be given just under the skin and into body fat, not muscle, in order for the insulin to be absorbed properly. If insulin is injected into muscle, absorption is erratic, even during light physical activity. The best angle for an insulin injection is between 45 and 90 degrees from the skin surface. In children, the angle should be closer to 45 degrees because children usually have less mass under their skin than adults. It is often recommended that thin patients and children should lift their skin prior to injection, thus forming a skin fold in which they can inject without going into the muscle. There are devices that permit injections without the use of needles.

Rate of Absorption: Insulin is absorbed at different rates depending on where it is injected. Physicians most commonly recommend that insulin should be injected in the abdomen or thighs, but it may also be injected in the upper arms or buttocks. Absorption is the fastest from the abdomen, then the arm, and the slowest from the thigh or hip. It is important to rotate the injection within the area used, placing the shots about one inch apart, until all the sites in one area are used before starting over. If insulin is repeatedly injected into the same site, a “hardening” of the tissue under the skin may occur and make the insulin more difficult to absorb. However, the same general area (i.e., thigh or abdomen) should be used so that the insulin is absorbed at the same rate each time it is given.

Factors Affecting Control: Some other factors which change the absorption of insulin are exercise or temperature. Insulin should not be injected into an arm or leg shortly before exercising because this will change the way insulin is absorbed. The area should not be massaged after injection since this will also change the absorption rate. It is recommended that diabetic patients avoid taking a hot shower or bath within one hour of injecting their insulin, since the increased temperature could increase the rate of absorption. All of these factors can significantly affect the control of blood sugar.