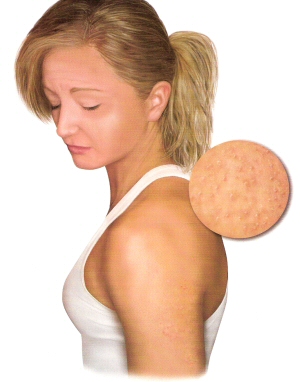 Keratosis pilaris is a common, easily recognized, benign skin disorder that is characterized by patches of tiny, hard bumps resembling small pimples on the skin’s surface. Often referred to colloquially as “chicken skin,” keratosis pilaris usually appears on the backs of the upper arms, the thighs, the buttocks, or the face as a rough patch of bumpy skin that does not itch. The bumps are hair follicles that are plugged by keratin, a protein found in skin cells. Often there is a coiled, ingrown hair inside the bump.

Keratosis pilaris is not a serious condition; it requires no treatment, unless the patient is bothered by the skin’s appearance. The use of topical moisturizers, salicylic acid, lactic acid, urea, vitamin D, or tretinoin may be of benefit, but the plugs usually reappear when treatment is discontinued. The condition has a connection to vitamin A deficiency, so supplementation with small amounts of vitamin A may help, Keratosis pilaris usually disappears eventually without treatment.

Keratosis pilaris, which often goes by the colloquial name “chicken skin,” is a very common, harmless skin condition thar can begin in childhood and continue into the adult years. Up to 40% of the adult population has some degree of keratosis pilaris, and during rhe teenage years, the percentage is even higher. Although it may appear on different parts of the body, the condition is easy to recognize because of its characteristic skin-colored bumps (sometimes surrounded by a light pinkish ring), which give the skin a rough appearance. The bumps are not inflamed and do not itch. In children and teens, keratosis pilaris is often located on the cheeks and may be confused with acne. In adults, it is more likely to be found on the backs of the upper arms, the thighs, and the buttocks. Diagnosis can be easily made by examination of the affected skin; testing is not necessary.

Treatment of keratosis pilaris is not essential, since the condition is not serious and does not result in complications if left untreated. Some patients want treatment for cosmetic reasons, however. Treatments can be frustrating because they are not always effective and the symptoms return once treatment is discontinued. The key is to increase moisture to the skin. During washing or bathing, scrubbing agents should be avoided on the affected area since they will make the dryness worse, and the skin should be gently patted dry and a moisturizing lotion applied immediately to lock in the moisture remaining on the skin’s surface. Nonprescription creams and lotions that contain urea or coconut oil to help soften the skin and lactic acid to remove the excess keratin may be beneficial.

The bumps should not be picked at or scratched, as this will cause them to redden, bleed, or even scar. Clothing should be kept loose around the affected area to prevent chafing.

Products That May Help

Prescription products such as retinoids (derivatives of vitamin A; two examples are tretmoin and tazarotene) act by removing the top layer of dead skin cells in order to prevent the plugging of hair follicles. These products may cause redness, peeling, and drying of the skin as part of their action, so they may not be well tolerated. Products that contain urea soften the skin while loosening dead skin cells, but they may also cause redness and irritation. Ammonium lactate cream or lotion is another treatment option to soften the keratin plugs. A dermatologist can help determine the best nonprescription or prescription product for an individual condition.

Ask your pharmacist about skin moisturizers that are useful for treating keratosis pilaris. Your pharmacist can also answer any questions you may have about topical medications your doctor has prescribed for this condition.