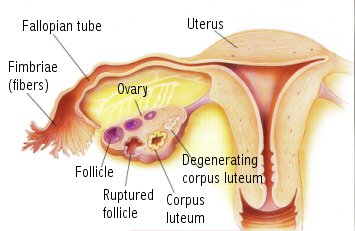 A Sac Filled with Fluid

An ovarian cyst is a common gynecologic problem. The most usual type is a functional cyst. This can occur when the sac in the ovary (called a follicle) matures and breaks open, releasing the egg, but does not shrink back to its normal size. A related functional cyst is a corpus luteum cyst, which is the result of bleeding in the sac after the egg is released. Functional cysts often disappear without treatment. A tumor or solid cyst, usually discovered during an annual gynecologic exam, may be more serious. Usually 6 to 8 centimeters or larger, these growths on the ovary can be either benign (not cancerous) or malignant (cancerous). When a solid cyst is discovered by examination and sonogram, surgery must be performed to remove the cyst and determine if it is cancerous. 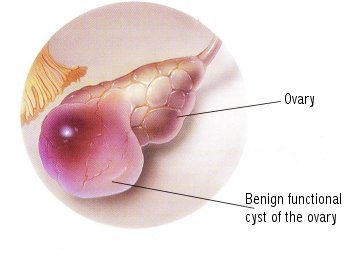 The majority of cysts are formed during the normal functioning of the ovary. They are not solid tumors and are not malignant.

Most Cysts Will Disappear

A doctor may feel a cyst as a soft, movable lump and it may not cause pain. Since most cysts are functional and not cancerous, they are rechecked by the doctor in 2 to 4 weeks to make certain they are becoming smaller. If they cause pain or menstrual problems, they may be treated with birth control pills to stop ovulation and speed up their disappearance.

Functional Cysts: Functional cysts are formed as part of the normal functioning of the ovary. They are common but cause anxiety due to the fear of ovarian cancer; however, they are usually not malignant. The normal follicle is about the size of a pea. It matures each month and releases an egg during ovulation, then shrinks back to its original size. Follicular cysts are formed when a follicle matures, fills with fluid, but does not shrink after an egg is released from the ovary during a cycle. Corpus luteum cysts are sometimes larger, and cause pelvic pain. They are formed when bleeding occurs in the follicle after an egg is released. Theca luteum cysts are unusual functional cysts, and occur with an abnormal pregnancy. They disappear after pregnancy is terminated. Another type of functional ovarian cyst occurs with a condition known as polycystic ovaries, in which many fluid-filled sacs are formed in both ovaries. These cysts have many sections or individual sacs filled with fluid, and often are associated with hormone imbalances.

Benign Tumors: Benign tumors of the ovary are usually found only on one side, and are easily moved around. They often do not cause symptoms until they grow large enough to put pressure on other organs. Symptoms include frequent urination, a feeling of “heaviness” in the pelvic area, or constipation.

Malignant Tumors: Ovarian cancer usually has a strong family link. If a tumor occurs before the first menstrual period or past menopause, the risk of malignancy is high. Very large tumors could actually cause a swelling in the belly, almost mimicking pregnancy. Cancerous tumors usually cannot be moved easily, and they may have nodules, or sections.

Diagnosis and Treatment of Ovarian Cysts: If a cyst is suspected of being malignant, laparoscopic surgery may be performed by inserting a thin tube with a camera through the navel, and removing the cyst with small instruments. Surgical removal will allow testing to determine if the growth is malignant so that treatment can be started immediately. Since so many ovarian cysts are functional, cysts less than 6 centimeters are often watched to see if they become smaller over a menstrual cycle or two. Sometimes birth control pills are prescribed for a month or two to shrink the cyst faster by stopping ovulation. If the cyst is larger than 6 centimeters or if it grows larger over this observation period, it is further evaluated using vaginal sonography. In this procedure, a small instrument inserted into the vagina uses sound waves to produce a picture of the uterus, fallopian tubes, and ovaries. The size and density of the cyst will be seen, helping the doctor to determine if the cyst is solid or full of fluid, and if its walls are smooth or jagged. If a cyst appears solid on a sonogram picture, laparoscopic surgery will be needed to remove and test it. If you have symptoms of an ovarian cyst, see your doctor. It is important to have an annual gynecological exam to check for the presence of an ovarian cyst or tumor.