Pacemakers: How They Work 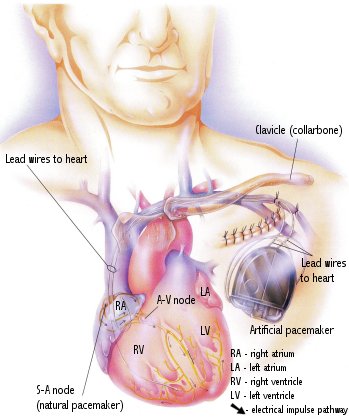 The heart beats about 100,000 times each day. Each heartbeat begins with an electrical impulse from the heart’s natural pacemaker, the sinoatrial node (S-A node), found at the right atrium. The electrical impulse it produces travels across a pathway of heart muscle to the lower pumping chambers, causing them to contract and pump blood throughout the circulatory system. If the heart does not work correctly, or the electrical pathway is blocked, the heart may beat too slowly, too fast or with an irregular rhythm. An artificial pacemaker can be used to stimulate the heartbeat into a normal pattern. The pacemaker is inserted under the skin below the collarbone and lead wires are positioned through veins that run back to the heart.

The size of a silver dollar, an artificial pacemaker maintains a normal heart rate and usually lasts about 10 years.

The first pacemaker was implanted in I960, and since then, more than one million patients have had a pacemaker inserted in their heart. Pacemakers have undergone dramatic improvements and modern devices can sense a person’s activity level and adjust the heart rate to match. When the patient’s activity level increases, the pacemaker increases the heart rate to the appropriate level. Patients with symptoms of a slowing heart often find they feel much better after an artificial pacemaker is implanted, and they are able to resume their normal life activities. The pacemaker runs on a battery that generates the electrical impulse needed for the heart to beat properly. Most pacemakers last between 7 and 10 years.

How They Work: An artificial pacemaker is a small generator about the size of a silver dollar. It has one or two lead wires that connect it to the heart. The generator runs on a battery. It is implanted during a minor surgical procedure that requires a local anesthetic and takes about one hour. After it is implanted, the pacemaker must be checked regularly by a physician to make sure it is working correctly. Your doctor may also ask you to check your pulse each day. The pulse is easily taken by counting the number of beats you feel with two fingers during one full minute, using the second hand on a watch or clock. Write down your pulse each day and report these numbers to your doctor as instructed. It is important to report any symptoms to your doctor that signal your pacemaker may not be working properly. These include shortness of breath, dizziness or fainting, drowsiness or fatigue, swelling of ankles, legs, wrists or arms, chest pain or hiccups. Since the pacemaker’s generator runs on a battery, the device must be replaced, usually after 7 to 10 years have passed; the pacemaker has a warning system to tell your doctor when it is close to being run down.

Environmental Influences: Although pacemakers are affected by strong magnetic forces, modern devices are not affected by microwave ovens, metal detectors or similar appliances. Cellular telephones currently used in the U.S. (less than 3 watts) do not appear to be a danger. Pacemakers are protected from these mild forces and a backup mode activates itself if a strong magnetic force affects programming. Patients with pacemakers receive a list of devices that may interfere with their pacemaker’s programming. Most devices that can cause trouble are medical devices, such as MRI machines; radiation treatments for cancer may also interfere with a pacemaker’s function. If a problem occurs, the pacemaker can be reprogrammed without being removed by use of a signaling device placed on the skin above the pacemaker. Pacemaker patients should always carry an ID card, and tell their doctor and dentist that they are wearing a pacemaker. If you have any questions, be sure to ask your physician.