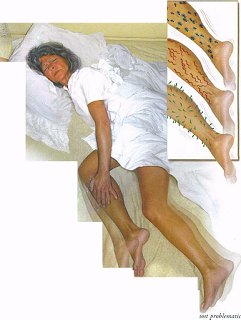 Uncomfortable Sensations in the Legs

Restless legs syndrome is a condition that few people know about, including many who suffer from it but have never had their symptoms properly diagnosed. Patients with restless legs syndrome describe a “crawling,” “burning,” or “tightening” sensation in their legs that is temporarily relieved by moving around but returns soon afterwards. They describe the symptoms as uncomfortable or even painful, and these symptoms often interfere with daily activities. The urge to move typically worsens when the patient is sitting or lying still, and it can be most problematic when the patient is trying to sleep at night.

Restless legs syndrome has been estimated to affect more than 12 million people in the United States. It can begin in early childhood; however, it is more commonly associated with older age and is slightly more prevalent in women. Once it begins, the symptoms of restless legs syndrome may continue and steadily worsen, or they may go away for a time or disappear completely. Most cases of restless legs syndrome have no known cause. In some sufferers, another chronic disease or a medication is associated with the symptoms, and once the disease is treated or the medication is stopped, the symptoms improve. It may be more common during pregnancy, as well as in people with low blood iron levels, serious kidney disease, or chronic neurological conditions.

Physical and Mental Symptoms: For most sufferers of restless legs syndrome, the primary symptom is an uncomfortable burning, tingling, crawling, or even painful sensation in the legs while they are at rest, which is relieved only by movement. Therefore, patients must continually walk, pace, or move their legs to rid themselves of this feeling. This constant need to move makes it difficult to work at a desk, concentrare on activities, and sleep. The result can be irritability, depression, and exhaustion. In addition to these symptoms, more than 80% of people with restless legs syndrome also suffer from periodic limb movement disorder – a sleep disorder that causes twitching and jerking repeatedly throughout the night. The chronic disturbances of sleep that these conditions cause can be dangerous for patients who suffer from them.

Detecting Restless Legs Syndrome: The diagnosis of restless legs syndrome is difficult, since there is no test for the condition. The history of worsening symptoms at rest, relief with movement, and a family history of restless legs syndrome is often all the doctor will need to know in order to make a diagnosis. Severe cases may require a neurologist or sleep specialist and muscle or nerve testing. Sometimes other conditions must first be ruled out. Many people with this condition are never diagnosed correctly; some who suffer with mild, infrequent symptoms do not seek treatment because they don’t believe rhe problem is serious or treatable.

Relieving Discomfort: There are a few simple changes that people can make to help relieve some of their symptoms. Avoiding caffeine and alcohol sometimes helps people whose symptoms are aggravated by these drugs. Since bedtime is often a time when symptoms intensify, some sufferers find a bath helpful to relax the leg muscles just before retiring. Biofeedback or other relaxation techniques can also help patients who have a difficult time falling asleep.

Ropinirole is a medication shown to help control the symptoms of Parkinson’s disease. It has been proved effective in patients with moderate to severe resrless legs syndrome and was recently approved by the FDA. Some patients also find relief with low doses of muscle relaxants, anti-seizure medications, painkillers, or sleeping aids. Treatment must be tailored to the patient based on individual needs and severity of symptoms. There is no cure for restless legs syndrome, but with proper diagnosis and patient care, the symptoms can, in most cases, be controlled.