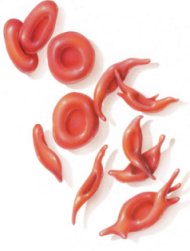 Sickle cell disease is an inherited blood disorder affecting mainly people of African descent. This blood disorder affects the hemoglobin in the red blood cell. Hemoglobin is the protein that carries oxygen throughout the bloodstream. People with sickle cell disease have inherited a gene from both their mother and father that causes abnormal hemoglobin to be produced. The disease is named after the sickle shape of the red blood cells produced in people with this condition. Normal red blood cells are circular, and they can easily travel through the tiny vessels of the bloodstream to carry oxygen to all parts of the body. The red blood cells that carry abnormal hemoglobin often stick together, break easily, and eventually form in the shape of a sickle, with a curved sharp end. Sickle cells clog blood vessels, and because they are more fragile than normal red blood cells, they break down faster, causing anemia. Although sickle cell disease has no cure, people with this condition live well into their 50s with modern treatment, which includes antibiotics and vaccinations to prevent childhood diseases. Sickle cell crisis, a serious complication involving uncontrolled pain, or lung and heart problems, usually requires hospitalization.

Serious complications of sickle cell disease can be prevented by having regular check-ups, eating a well-balanced diet, and avoiding overexertion, stress, and extreme temperatures. If the patient develops a fever or other signs of an infection, prompt treatment is needed.

Oxygen Cannot Reach Organs: Sickle cell genes result in the production of an abnormal form of hemoglobin, which causes red blood cells to stick together and form the shape of a sickle, with a curved sharp end. Sickle cells clog blood vessels, and because they are more fragile than normal red blood cells, they break down faster. Both of these situations lead to the symptoms of sickle cell disease. When the red blood cells break down too quickly, the amount of hemoglobin in the blood falls below normal, causing anemia and fatigue. When blood vessels are clogged, oxygen cannot reach the body’s organs and tissues where it is needed. The result is a series of painful crises, usually in the bones of the arms, legs, chest, and back. Almost all patients with sickle cell disease experience periodic bouts of pain, which can last for hours to days, and they are often in need of strong pain medications. Bedrest can help by reducing the need for oxygen. In some cases hospitalization and administration of intravenous fluids are required. In severe cases, the spleen becomes damaged by the massive numbers of sickled red blood cells and it must be surgically removed. Other common complications include stroke; destruction of joints; leg ulcers; infection; kidney, liver or lung disease; and miscarriage.