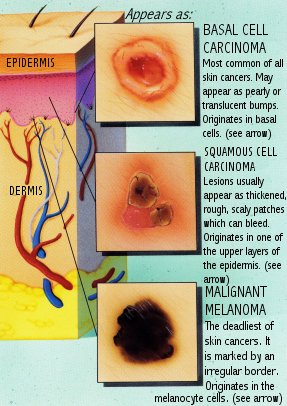 Skin cancer is 99% curable when detected and treated at an early stage. More cases of skin cancer are diagnosed and cured each year than all other types of cancer combined. The most serious type, malignant melanoma, is also the most rare but it must be treated early. Risk factors are sun exposure, unusual number or type of skin moles and a family history of skin cancer.

Skin cancers are curable when they are diagnosed and treated early. Basal cell carcinoma is the most common type.

Basal Cell Carcinoma: This type of skin cancer originates in the bottom layer of cells (or basal cells) which form the border between the two layers of the skin, the epidermis and below it, the dermis. They are usually found in middle aged or older Caucasian men with outdoor occupations and who have a family history of skin cancer. They are also more common in persons who live in sunny locations, such as the American “sunbelt.” Basal cell carcinomas are very slow growing and take months or years to become noticeable. They are usually small, hard, round tumors and are painless. They may form open ulcers with a depressed center and some bleeding. If they are removed properly when first discovered, they are almost always cured.

Squamous Cell Carcinoma: This type develops in the squamous layer or upper layer of skin that is exposed to the environment. This type is also found mainly in older Caucasians who are frequently exposed to the sun. Squamous cell carcinomas grow faster and are more invasive than basal cell carcinomas. These growths are small, rough or crusty, hard and reddish. They are mainly seen on the head and hands. After the tumor and surrounding tissue are removed, radiation therapy may be indicated.

Malignant Melanomas: These cancers are formed in the pigmented (colored) skin cells (called melanocytes) that manufacture the pigment causing light skin to “tan” when exposed to the sun. Melanomas are the most serious of all skin cancers. They are generally seen in areas as a dark or pigmented growth. Heredity is a risk factor. They often occur in the pigmented cells of moles. Dermatologists recommend the removal of certain moles for this reason. If melanoma has already spread when discovered, chemotherapy and immunotherapy may be used.

Avoiding Skin Cancer: Skin cancers are common in areas of intense sunshine and, as stated, in people (especially Caucasians) who sunbathe or work in the sun. The areas that are affected are commonly exposed and include the face, back of the neck and hands and the top of ears in men.

It is important to see a physician if any of the following are noticed: A skin ulcer that does not heal in six weeks; a lump or growth that bleeds; a lump or growth that enlarges, especially those that are hard or firm; a mole that is brown or black and splotchy or has an indented border; a mole that itches or is tender. During the exam, the dermatologist will take a skin biopsy to determine if the sample is cancerous. The best prevention is avoiding exposure to ultraviolet light from the sun or tanning lamps. Use of a sunscreen is important, especially for people with light skin. Your pharmacist can help you select the right sunscreen product to protect your skin.