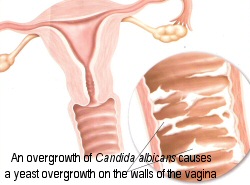 Vaginitis is an inflammation of the vaginal tissue that can be accompanied by intense itching, pain, and discharge. One of the most common causes of vaginitis is an overgrowth of Candida albicans, often found in the vagina in small quantities. The acidic environment of the vagina keeps the growth of Candida albicans under control by allowing protective bacteria to flourish. If this environment changes, the balance between fungus and bacterial growth can lead to fungal overgrowth and inflammation.

A vaginal yeast infection, also known as vaginal candidiasis, is an inflammation of the vaginal tissue usually caused by an overgrowth of Candida albicans, a fungus commonly found in the vagina. This overgrowth results from a change in the acidic environment in the vagina, allowing the Candida to grow unchecked by protective bacteria. The vaginal environment can be changed by several factors, all of which increase the risk of infection. An infection will often arise after treatment with oral antibiotics, which kill the protective bacteria and allow the fungus to survive and flourish. Changes in hormone levels, which can occur during pregnancy, menstrual periods, or while taking birth control pills, can also alter the vaginal environment and favor fungal overgrowth. Diseases that result in suppression of the immune system, such as cancer, HIV, or AIDS, can also be risk factors.

Signs and Symptoms: The classic symptoms of a vaginal yeast infection include burning and itching of the vaginal tissue and vulvar area (tissue outside the vagina). Some women notice a vaginal discharge often described as a thin, white, or watery or a thicker discharge resembling cottage cheese. A woman may also experience redness and swelling of the vulvar tissue, painful urination, or pain during intercourse. Not all these symptoms arc present in every woman with a vaginal yeast infection. In addition, many symptoms are similar to those of vaginal infections caused by bacteria or trichomonas. Since the symptoms of vaginitis can be similar regardless of the cause, it is important that a doctor’s examination and laboratory testing of the discharge are used to confirm the diagnosis of Candida when the initial infection occurs so the correct therapy can begin. Once the patient is able to recognize the symptoms of a typical yeast infection, future infections can be treated using nonprescription vaginal antifungal medication, such as clotrimazole or miconazole.

Although vaginal candidiasis is not considered to be a sexually transmitted disease, it can occasionally be transmitted to a partner through intercourse. If symptoms develop in a sexual partner, a doctor should be contacted to decide on the most effective treatment.

OTC and Prescription Medications: Several approved vaginal antifungal products are available without a prescription either as a cream or suppository inserted into the vagina for a specified number of days. Some products provide an additional amount of cream that can be used on the vulvar area to help relieve itching. If these products are not effective in the time specified on the instructions, a doctor should be contacted for follow-up. An oral antifungal drug (e.g., fluconazole) may be prescribed when nonprescription medications fail. The symptoms may not be caused by Candida albicans, in which case no antifungal medication will successfully treat the vaginitis.

Preventive Measures: There are several recommendations for the prevention of recurring vaginal yeast infections that may be effective. Some doctors recommend adding yogurt and/or cranberry juice to the diet to help restore a normal vaginal environment that will not favor the overgrowth of fungus. To prevent excess moisture in the genital area that can provide an ideal environment for fungal growth, cotton crotch underwear and loose-fitting clothes are preferred. Wet bathing suits and workout clothing should be removed as soon as possible and washed prior to next use. Avoiding the use of feminine hygiene products, vaginal deodorants, and douches is recommended, since they can cause recurrent irritation of the vaginal tissue.